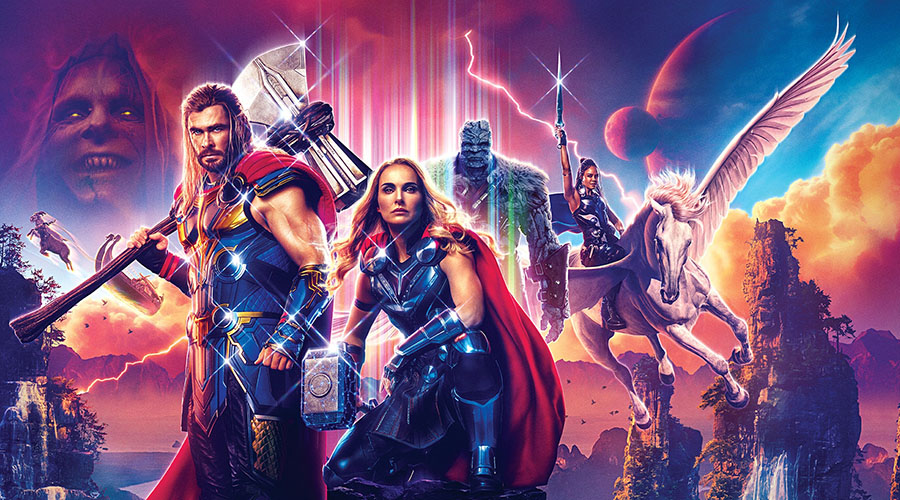 With the surprise reinvention of a comic Thor in Thor: Ragnarok, expectations were high on the humour front when iconoclastic writer/director Taika Waititi signed on for the sequel Love and Thunder. Bringing back early love interest Jane Foster (Natalie Portman) was also intriguing. With all this anticipation, how did things pan out?

The results are a mixed bunch, to say the least. The breezy Antipodean humour of the previous film is almost entirely missing. The jokes feel formulaic and forced and the hit ratio of laughs to groans is quite low. There are some funny bits like Thor’s naked butt rocking some tramp stamps and Russell Crow’s hammy appearance as Zeus that do help to spice things up.

As oft times in these endeavours, it’s the lack of imagination in the script that keeps things tethered to the ground. It feels like they came up with a need for the film before the need to tell an engaging story. It descends into the trap that some Marvel films fall into of being product first and vehicles for solid storytelling second.

The list of under-utilised characters is long. Tessa Thompson as King Valkyrie and Christian Bale as the baddie Gorr leave little trace as does the almost entire cast of Guardians Of The Galaxy in the first reel. It’s a strange misstep from a brand that usually integrates its franchises so successfully. Unfortunately, lightning hasn’t struck twice this time.