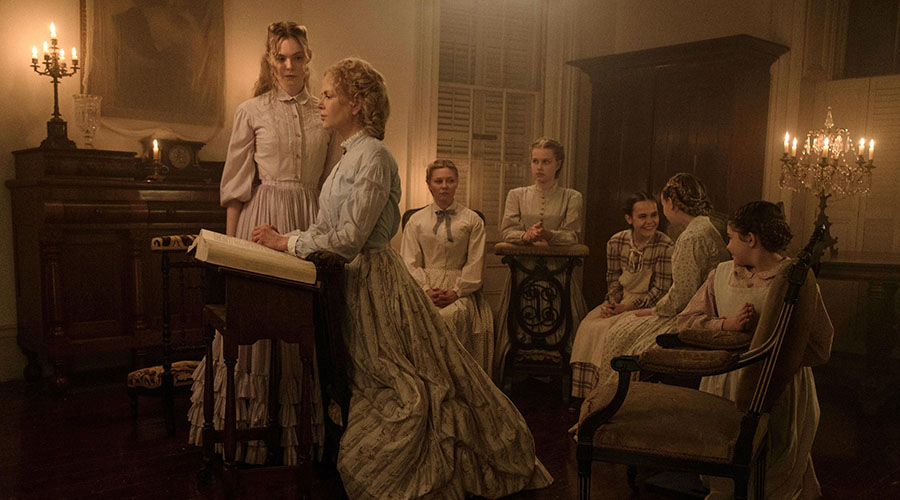 Very dark (literally and figuratively) and moody, writer/director Sofia Coppola’s take on Thomas P. Cullinan’s novel is an atmospheric treat, but it takes work. It’s shot so sparsely lit and with such a muted colour palette, it’s very hard to discern detail. The actor’s facial expressions are often times lost in this approach. At first it had cinema patrons asking if there was a technical issue with the projector. After the first reel, you just had to go with the flow.

The film is period correct and set during the later part of the American Civil War. It examines the effects of isolation and a group dynamic during a prolonged period of conflict. These circumstances guide the actions of both the innocent and the guilty. It offers this information with little opinion and you are left to follow your our path into the character’s actions.

The cast is filled with some heavy hitters. Colin Ferrel reprises the Clint Eastwood role from the seventies version and is cast perfectly as he is out numbered and ultimately out done by a house full of Southern Bells. Nicole Kidman does what she does best, gets the mix of aloofness and concern just right and Kirsten Dunst successfully follows her great work in season two of Fargo.

Things unfold in an unhurried and leisurely rate. Far from off-putting, this succeeds in drawing you in as does all the work you put in actually following what’s happening on screen. It is however, well worth the effort.