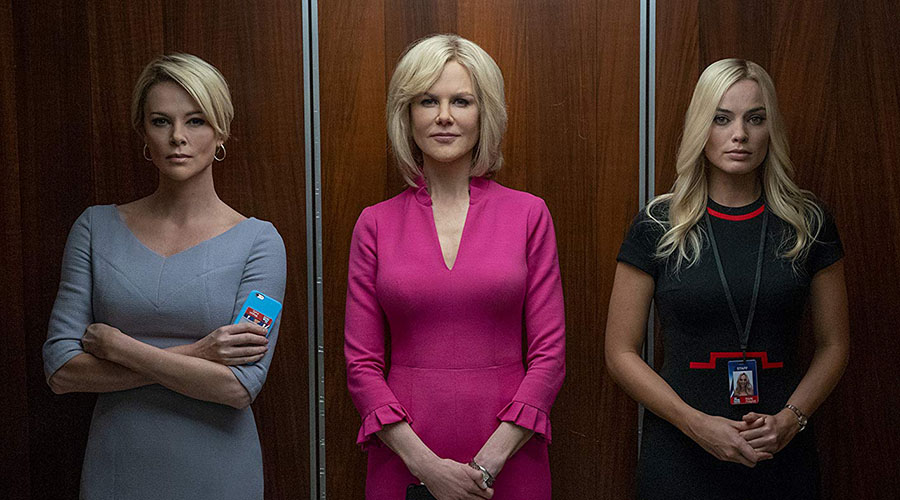 There is a fine line when presenting these horror stories of abuse between creating on-screen victims that people can relate to and not just feel sorry for or ones whose stories are so outrageous, they just can’t be true. It’s this abhorrent grey area that has swallowed up so many innocent lives. It’s been a darkness that has needed illumination for a long time.

Bombshell shines a light on one of these stories, in the case, it’s the detestable behaviours that took place at Fox News under the leadership of serial abuser Roger Alies, played here with suitable repulsiveness by actor John Lithgow. He is a repugnant man in every way but his ability to make millions of dollars for his overlords keep him in power for way too long. A few brave women came forward and ended his reign.

The main women in this action are played by Charlize Theron as the real life Megyn Kelly, Nicole Kidman as Gretchen Carlson and Margot Robbie who plays the fictional Kayla Pospisil, who is a composite character representing many of the other women who were victimised, some who came forward, some who did not. The film is very effective at portraying these women as real people, not just victims. You feel for them and their story is more powerful because of that.

As more and more of these appalling stories come to light, it’s important to not be overwhelmed by their magnitude and frequency. Each one is no less horrific just because it followed another. Bombshell presents its tale in a way that should involve the audience and help them see past the sensationalistic elements of the story to the core of the problem, this may lead to the accusations being seen as lightweight but it’s important for the film’s commercial impact for it not to be too harrowing. This kind of activity in the workplace is a problem that we must all be aware of and act upon.