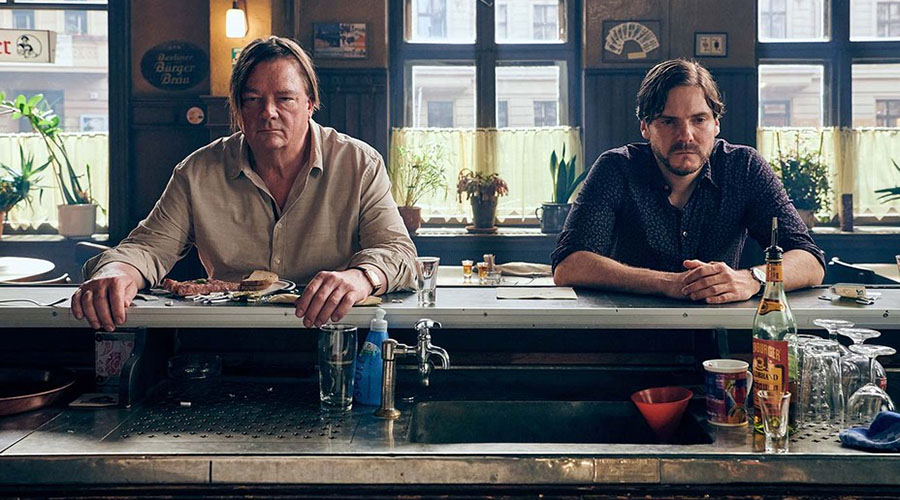 One of Germany’s best known cinema exports Daniel Brühl makes his directorial debut with Next Door. It’s a work that unravels both the participants and audience expectations in a most engaging way. It takes the slow burn approach and ensnares you as more information is presented and the reveals start to add up.

Brühl plays Daniel a well-known movie star who stops for a beverage at a local bar on the way to the airport and gets a lot more than he bargained for from the visit. He becomes engaged in conversation with one of the patrons Burno (Peter Kurth) and is at first amused, then annoyed, and finally horrified by the level of information this man has on him and his family.

It turns out Bruno lives in the building next door to Daniel’s movie star digs and has spent hundreds of hours gleaming all the details of his neighbour’s life. This is a sharp take on the narcissistic tendencies of the movie elite and the isolation from the common folk that is engendered by that level of fame. Unfolding almost like a detective yarn provides you with some great Sherlock moments.
Rob Hudson

Presented by Palace, the German Film Festival will screen the best new films from Germany showcasing Festival favourites, works of auteurs and the best new talent.

This year’s programme, presented in association with German Films, will screen from 25 May – 20 June at Palace Cinemas across Melbourne, Sydney, Brisbane, Byron Bay, Canberra, Perth and Adelaide.

Next Door is playing in Brisbane as part of the German Film Festival: