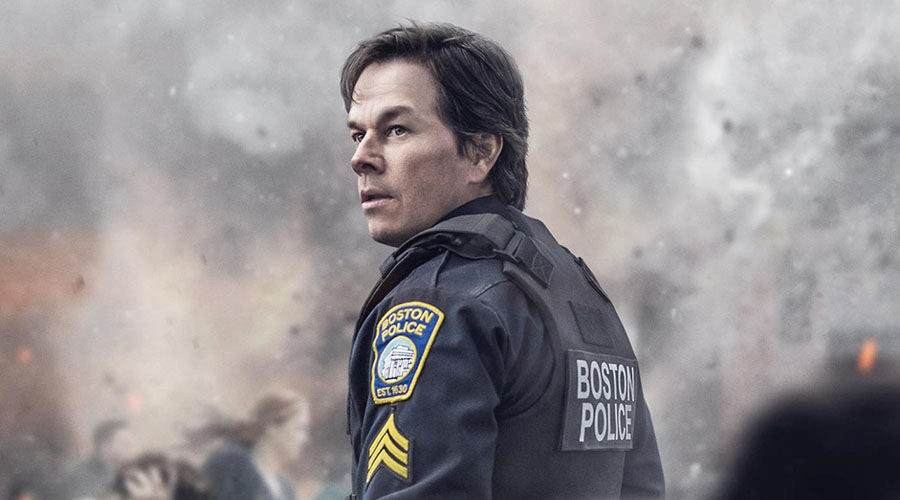 What makes a hero? Is it an impossible task done with no consideration for ones own safety or can  the status be accomplished via a more simple task. While the American political system melts down in full view of the world’s media, can an American hero be considered one who just stands up for his or her own moral views? In this present environment, Patriots Day tries to present the American spirit and heroic behaviour in the way that lands within the traditions of the past.

Casting Mark Wahlberg as one of the heroes of the piece seems a no brainer as it’s a role he has played time and time again. To his credit this time his portrayal of a somewhat flawed character rings truer to real life than many of his previous roles. The story revolves around the domestic terrorist bombing that occurred during the 2013 running of the Boston Marathon and the events that followed as seen through the victims, authorities as well as the perpetrator’s eyes.

The film’s action sequences involving the ensuing manhunt and police shootout after the bombing play out like the wild machinations of a Hollywood writer on too much caffeine. It’s only after reading up on the actual circumstances that you learn of the extraordinary real events than took place. Even the perpetrators are give an extra edge by the normalcy of their everyday existence.

In stark contrast to many films of this ilk, Patriots Day carries quite the emotional impact. Even the overstated coda at the end is effecting. It was a horrible crime and one that brought out reserves of strength from both victims as well as those tasked with finding the criminals behind it. Having the heroics on display cover the gambit from small moral victories to large scale efforts give the film a surprising sense of emotional engagement.