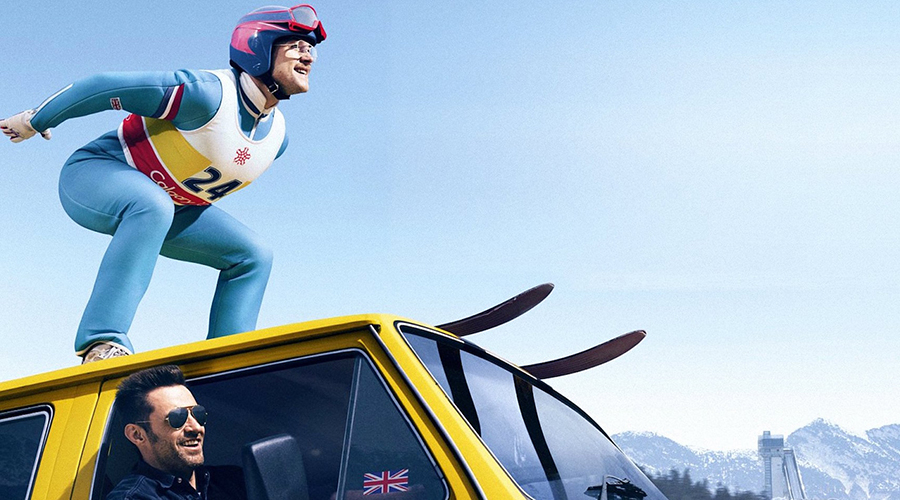 There have been many, many films made about our equally many sporting heroes and they all tend to hit much the same beats. Commonly these heroes will hail from non-privileged, undisciplined backgrounds to rise above all adversity to become kings and queens of their respective sporting fields. As such, one story is much the same as the other.

It is perhaps a result of the popularity of geek chic in recent times that a movie about an athlete who goes to the Olympics and comes dead last in his event has become a commercial viability. Such a story has precedence in truth, of course, with Eddie ‘The Eagle’ Edwards, a British ski jumper that was so far behind the competitive field of his Olympic peers that he endeared himself to people the world over for simply having the guts to ‘have a go’.

It must be said from the outset that there is a great disparity between this film and the facts in terms of the peripheral characters and some of the locales. Indeed, Eddie Edwards himself has claimed that only 5% of the story portrayed in the film is true. But that 5% represents the spirit of the man and his unshakeable determination to achieve his goals. In, perhaps, a Lord of the Rings fashion, the details may, at times, deviate significantly from the source but the broad strokes feel right and we receive a message that is in keeping with how we remember things panning out.

Star, Taron Egerton, first appeared on our radar in Kingsman: The Secret Service and with his hugely endearing performance in the title role here, he marks himself as an actor to watch. Hugh Jackman brings his usual infectious charisma to his fictitious, disgraced athlete come ski jump coach. And even Christopher Walken appears as another (albeit fictitious) character.

Eddie the Eagle may not be entirely true to life but it is true to tone. The film is funny and heartfelt and speaks to a worthwhile theme of never giving up on your dreams – even if you’re (relatively) crap at it.