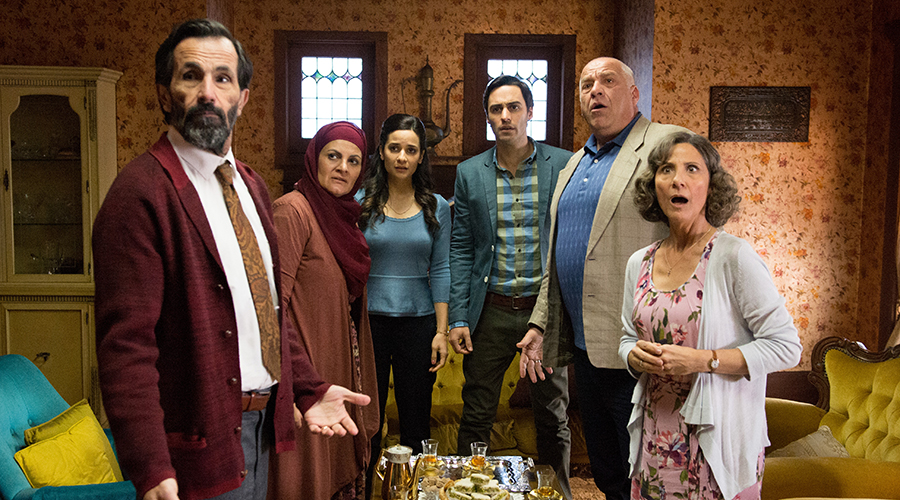 Alex & Eve is an Australian comedy that takes a hilarious look at love, cultural differences and the kind of crazy only the family can bring out. I got in touch with actor Richard Brancatisano and writer Alex Lykos for a little insight on this gem.

Richard Brancatisano
Your performance was very well nuanced and your comic timing was excellent, how comfortable does comedy come to you?
“Thank you. Acting in comedy is fairly new to me. I love watching comedies so it was very exciting to finally be a part of one. In this film in particular I was playing more of the straight character with my family and students providing most of the comedy. I had to represent a normal point of view for the audience to relate to and for the other characters to bounce off. So keeping a straight face and maintaining normality amongst the chaos of comedy that ensued most days was quite a challenge for me. I would often break into laughter especially during scenes with Tony and George.”

The film plays out in a very unforced way, can you talk a bit about how the cast came together and what the shooting schedule was like.
“I knew that when I auditioned for the film, Andrea (Demetriades) who plays Eve, was already cast. So we had very skippy Skype sessions during the casting process trying to read the scenes together and sense weather the chemistry between us was a good match for the film. Having Andrea attached to the film made it even more of a project that I wanted to be a part of. The schedule was extremely hectic for Andrea and I. We shot for five weeks shooting pretty much every scene everyday. This left no room for second guessing and over thinking the performances.”

Also what was it like having some key scenes not rehearsed until the cameras were rolling?
“This made for a very exciting and unpredictable set. I love working this way provided we know we are playing in the right territory. It makes for a lot of happy surprises but requires the actors to understand their characters well so they can create within the character’s world. A lot of the time what you do in the rehearsal has to be balanced with a whole new approach due to the new environment, blocking and lighting constraints.”

I really enjoyed the teacher/student scenes (it reminded me of a few cool teachers I had) were all the cast members professional actors? And if not how was it working with them?
“A lot of the students were new to acting or had never done it before. Some of them were actually Alex Lykos’s actual students! They were all wonderful, generous, and passionate and made me feel like a respected and loved teacher. These were important scenes to get the tone right. So big thanks to them for making me feel so comfortable and providing me with the right mix of respect and rebellion.”

The family struggles in the film felt very real; did your home life mirror any of the circumstances in the film?
“Luckily for me it didn’t. My Mum and Dad have always been very open and accepting of all my choices. I’m very grateful for that. It allows me to feel supported and comfortable to make choices that I feel are right for me.”

Alex Lykos
Alex I must commend you on transferring Alex & Eve from stage to screen as it never felt less than a film and didn’t feel at all like an adaptation to another medium. How difficult was the transition?
“It wasn’t that difficult. The stage show had a strong narrative, a strong spine and it was just a matter of making the peace ‘breathe’ a bit more, making it more visual and adding some subplots to further highlight the central plot, like giving Alex an older brother (played by myself) and juxtaposing Alex’s life with the older brother’s.”

When you originally wrote the play did you ever envision it as a movie?
“No, not really. I may have dropped into a daydream a couple times but not really. It has been a struggle and for some reason, my writing doesn’t work on the page and therefore it is much harder for people to give it the green light.”

You captured the way normal people speak very well (even the family squabbles felt real) what is your technique for capturing everyday language. Do you find a cool café in a diverse section of town, hang out and just listen?
“No, because I am not cool. Uncool people don’t go to cool cafes. I am fascinated with people and I am always observing their mannerisms and nuances, how they speak etc. It’s something that I spend time studying every time I am out.”

Having Alex’s father and Eve’s mother be so alike was a clever touch, how did you arrive at that dynamic?
“The reality is that parents, despite their huffing and puffing, want one thing for their kids: they want the best for them. And that is the core of the two families and it just so happens that both parents definition of what they think their kids want, is very different.”

With the film’s end, did you ever envision it ending any other way?
“Actually, there are three stage shows and the ending is different. There is Alex & Eve, Alex & Eve: The Wedding, Alex & Eve: the Baby.  So I played with a variety of different endings and then settled with this one.”