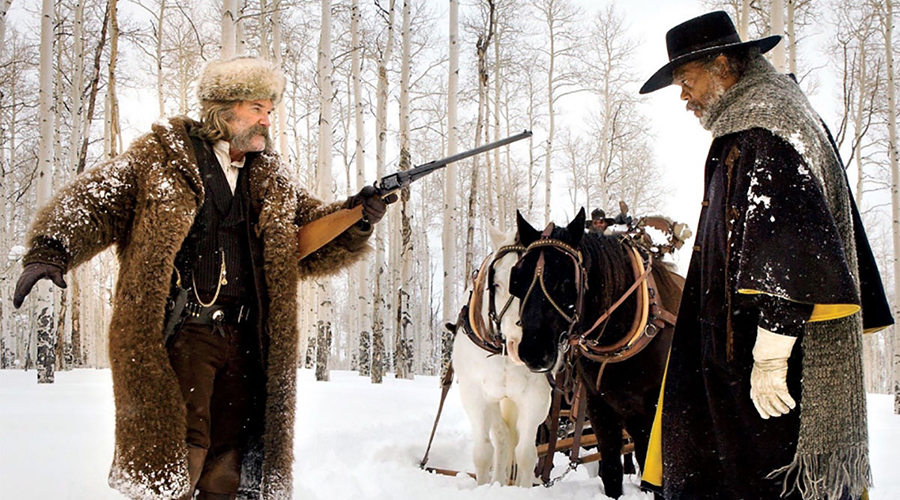 From its very existence being resurrected from the dead (after its original script was leaked) to the now finished 147-minute opus, The Hateful Eight has been bubbling under in the film hype stakes for a long time. That it arrives during the run of the world’s biggest film ever only adds to its antihero status. It’s also easy to forget that in Tarantino’s over 22-year career as a director, this is only his eighth full-length feature film. Love him of hate him, his first seven films have changed the film landscape forever.

His new film is another period piece (that makes three in a row) and plays out like a longhand love letter to his past. The Western is set almost exclusively in one room and is dialogue heavy to the extreme. That it works so effectively at it’s almost three hour running time is a testament to his skill with words and his utilization of the right mix of actors and actions. The violence is extreme in the few moments that it occurs and gives the film its rightfully earned R rating.

Tarantino’s films have always rewarded fans of the medium and the new work is rife with references to his earlier films (Red Apple anyone?) and nods to directors he appreciates (Alfred Hitchcock is first to spring to mind). He also revels is doing things his way, so I can’t see even a power couple like Bob and Harvey having the ability to pare back the extended running time.

Investing time in a QT film is always a safe bet because even if you don’t like his work, he creates film dialogue like no other. Discussing his films with your friends after the screening can be almost as much fun as the viewing itself, so sort yourself out after your mandatory trip to spend time with the Part 4 repeat and settle in for a generous treat of a film both time and content wise.