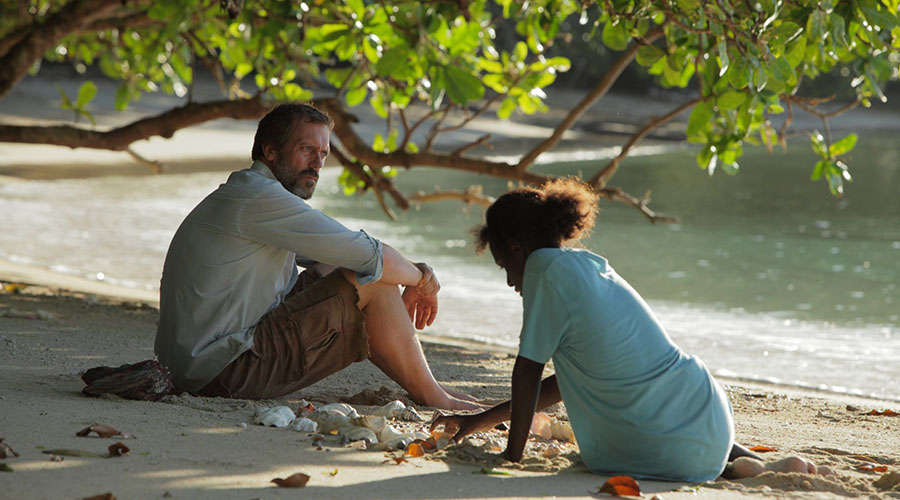 There are a number of ways to look at the film Mr. Pip. The most overriding context is the study of man’s inhumanity to man or as an exploration of the power of great literature to free minds from the harshness of life. The story also touches on the virtues and pitfalls of a simple life amid a closed community.

The film based on a novel by Lloyd Jones is set in Bougainville, Papua New Guinea during the civil war there during the early nineties. The story revolves around Matilda (Xzannjah Matsi) and the relationship she has with her mother Dolores (Xzannjah’s real life mother Healsville Joel), Mr. Watts (Hugh Laurie) the only white man in their small village and the novel Great Expectation by Charles Dickens.

Matilda’s somewhat idyllic life is brought to a crashing halt when rebel soldiers shatter the tranquil life of her village. She escapes into the world of Great Expectations to cope with the horrors and begins an imaginary relationship with a character from the book, Pip (Eka Darville).

The mix of professional and non-professional actors and being filmed on an actual island in Papua New Guinea give the work a very believable feel. This believability is what makes the film’s emotional content so heartbreaking. Its ultimate feat is not just the main character’s escape from the island but also the ability to make the audience members feel and care about a real world tragedy and triumph.