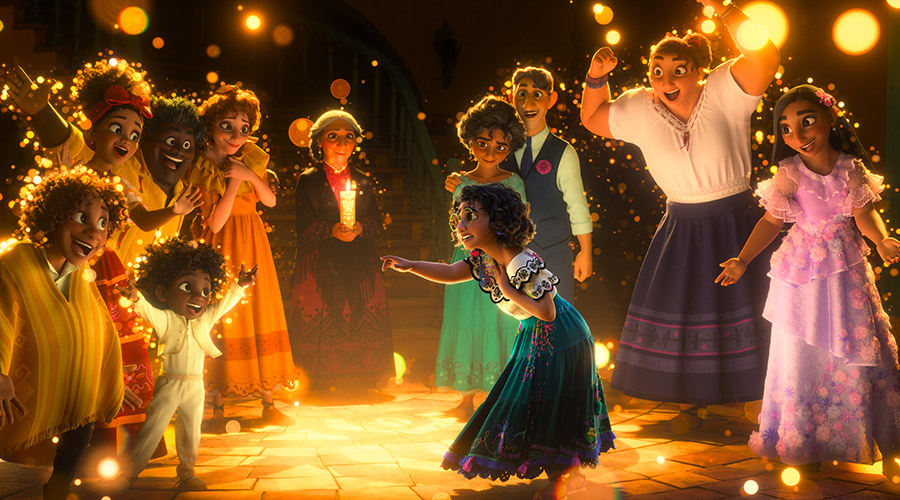 On diving into the music of the Colombian-set story, Miranda said “A lot of the rhythms are familiar to me, but the instrumentation and orchestration is different and often unique to Colombia. One of the most fun things is that the accordion is so central to the music. It was really a joy immersing myself in artists I didn’t know and doing deeper dives into those I’ve grown up loving—like Carlos Vives, who we’re lucky enough to work with on this movie. This entire process has been about falling in love with Colombian music and culture and getting to play in that space.”

Miranda wrote and produced eight original songs for “Encanto.” Mike Elizondo (“96,000″ from “In The Heights,” “My Shot (Rise Up Remix)” from The Hamilton Mixtape) co-produced the songs. “I hope audiences come away singing these songs just like so many classic Disney movies,” said Elizondo. “There are so many positive messages about family and our relationships to one another. I also hope they realize how much variety there is in Colombian music. I learned so much about their rhythms and styles during the production process and I hope the audience can use the soundtrack as a gateway to discover Colombian music.”

The Encanto Original Motion Picture Soundtrack features eight original songs and a full original score, plus one reprise and one end-credit version of a song from the film. The digital version of the soundtrack also includes instrumental versions of the songs.

Award-winning composer Germaine Franco is behind the original score for “Encanto.” Franco worked closely with filmmakers and Miranda to create a signature score that complemented the songs and story.

Commenting on the score, Franco said, “Collaborating with Jared Bush, Byron Howard, Lin-Manuel Miranda, Charise Castro Smith, and Yvett Merino was a dream! We created new textures and sonorities, using traditional Colombian instruments such as tiples, bandolas, cununos, marimba de chonta, arpa llanera from Latin America mixed with orchestra. The sound of the score is infused with many Colombian rhythmic styles including bambuco, mapalé, cumbia, and joropo. The score weaves in and out of the beautiful songs of Lin-Manuel Miranda. I hope that the musical imagery of the score evokes the resonant landscape of Colombia, the tenacity of our lead character, Mirabel, the strength of family, and our shared humanity.”

In the film, the magic of the Encanto has blessed every child in the family with a unique gift from super strength to the power to heal—every child except one, Mirabel. But when she discovers that the magic surrounding the Encanto is in danger, Mirabel decides that she, the only ordinary Madrigal, might just be her exceptional family’s last hope. The voice cast includes Stephanie Beatriz, María Cecilia Botero, Wilmer Valderrama, Adassa, Diane Guerrero, Mauro Castillo, Angie Cepeda, Jessica Darrow, Rhenzy Feliz and Carolina Gaitán.

Encanto will be released in Australian cinemas December 2!
www.facebook.com/DisneyAUNZ/