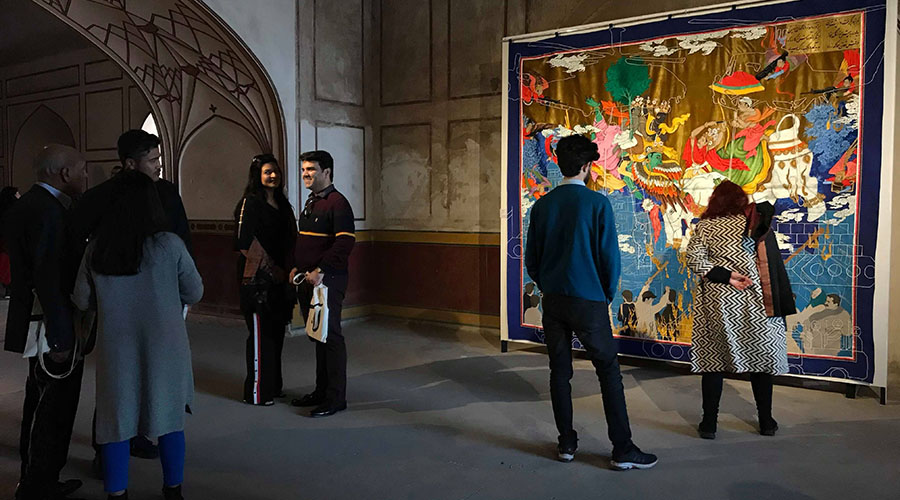 “I became other. I became one of the wearied, dusty faces from across the border. And although there was no boundary between us, and we were all citizens of one country, suddenly an invisible border of horror was drawn around me that made it impossible to get out”—Khadim Ali

In his largest Australian solo exhibition to date, Hazara artist Khadim Ali explores the normalisation of war and the experience of refugees through a series of poetic installations and textile works. Invisible Border comprises sound installation, miniature painting, and a monumental 9-metre-long tapestry, hand woven by a community of Hazara men and women, some who have lost family members in war. Featuring existing work alongside new commissions developed for the IMA, the exhibition will also feature Otherness, a major body of work developed in partnership with the IMA and Lahore Biennale Foundation.

Ali’s interest in tapestries developed soon after his parents’ home in Quetta, Pakistan was destroyed by suicide bombers. Amongst the rubble and debris left from the blast, a collection of rugs and weavings remained the only thing intact: miraculously able to withstand the reign of terror inflicted upon his family and community. In this new large-scale tapestry, and other works, Ali explores the impact of war, trauma and displacement drawing parallels from the Book of Shahnameh, a Persian literary masterpiece comprising of 50,000 couplets and written between c. 977 and 1010 CE.

Just like the many great mythic tales in the Shannameh, Ali’s intricate works depict stories of demons and angels, conquest and war through the lens of the persecuted Hazara community. Expressing the profound grief, trauma and loss experienced at the hands of modern-day warfare, Invisible Border is a necessary and vital exhibition during a time of political propaganda, violence, and fear.