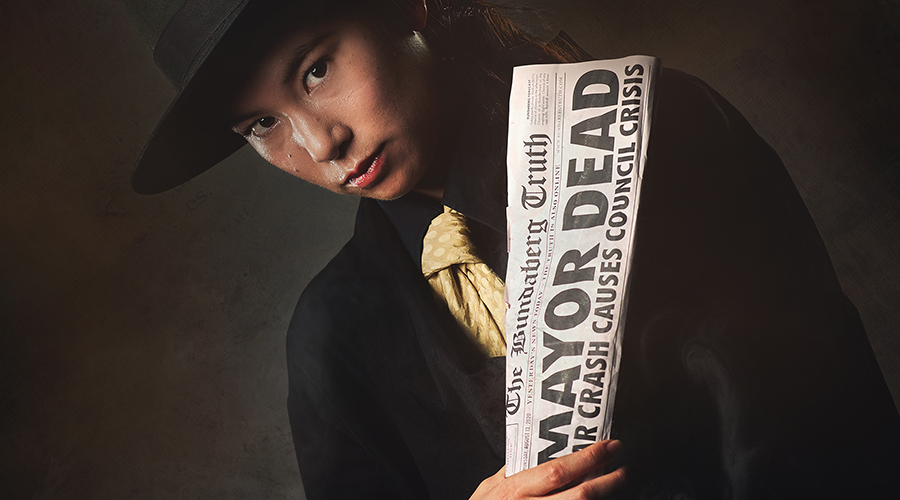 Death In A Statesman is coming to the Judith Wright Centre this November!

You had better get your story straight and your alibi sorted for the November premiere of Death In A Statesman. After the success of the award-winning The Longest Minute, debase creatives Bridget Boyle and Robert Kronk along with regular debase collaborator Allen Laverty – are turning their hand to the noir genre – with a regional Queensland twist.

Combining a suspicious death, strained family relationships, generational change, and a reckoning of what being Australian actually means – Death in a Statesman is funny, smart, and wears the hell out of a fedora.

The play is set in Bundaberg and spans from 1985 to the present day, taking in a range of characters that will be immediately familiar to anyone with a nostalgic love of regional Queensland. But all the typical tropes of noir, including the centrality of the white, middle-aged male detective, get turned on their head in Kronk’s hilarious yet deeply felt text.

Cliff’s life is in the toilet: he’s lost his wife, his job, and he’s back living in Bundaberg. Struggling to reconcile with his daughter (and his mother), Cliff navigates family dramas, local politics, and a potential murder case … all without a car.

Elliott’s doing alright: she’s finishing Year 12, looking after her grandmother, and running the family newsagent … until her estranged father turns up out of the blue, the mayor turns up dead, and the papers don’t turn up at all.

Of all the rum joints in all the world, it had to happen in Bundy.

Growing up in the Bundaberg region, Kronk has written this play as an ironic but warm love letter to his hometown. “I love the noir genre and I just wondered what that would look like set amongst the cane paddocks and the hot sleepy streets of Bundy that I remember from my childhood. All these incredible characters just started emerging,” he said.

Award-winning director Bridget Boyle who has worked closely on the development of many of Kronk’s works said this one is special. “The title is more than a typical Kronkian play on words. Just like in Death of a Salesman, our hero has to have a reckoning with himself about his relevance in a changing world. This show is going to make you laugh and then cry. I can’t wait for everyone to see it,” she said.