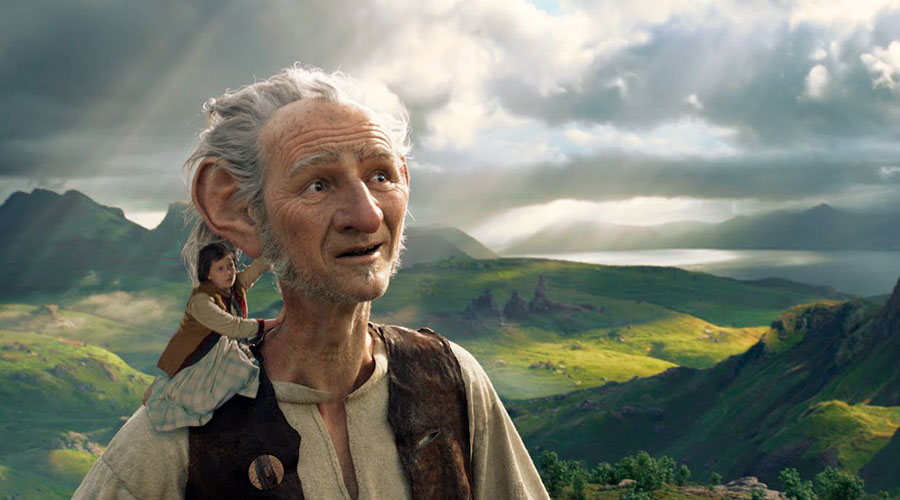 I’m almost a complete noob when it comes to Roald Dahl. I didn’t experience a Dahl childhood; his literature did not have a presence in our household. My only experience of his work was Willy Wonka and the Chocolate Factory (1971) which I loved, and Chitty Chitty Bang Bang (1968) for which he wrote the screenplay and which I liked much less.

My only experience of a ‘BFG’ was the BFG9000, a weapon found in the Doom and Quake video games using an acronym that implied words that ought not be uttered by a child. Given Roald Dahl’s twisted mind, I would be unsurprised to learn that he was well aware of this possible interpretation when he released his book about a ‘Big Friendly Giant’ in 1982.

An animated TV version of The BFG was released in the late 80’s but this time around Steven Spielberg has turned his acumen to a live action version starring the remarkable Ruby Barnhill as orphan child, Sophie, who befriends the ‘BFG’, a motion captured computer generated Mark Rylance.

Given his sterling performance in Bridge of Spies, Rylance appears to be becoming a male muse, of sorts, to Spielberg and understandably so. His performance in The BFG is as measured and understated as Spielberg’s prior spy biopic. Newcomer, Ruby Barnhill, is also a revelation, displaying a manner of non-precocious confidence and sass rarely found in a child actor.

Spielberg has produced a film that, while set in the early eighties, drips with Dickensian charm. It’s an old-fashioned kind of movie that is rarely made these days. Its soft, warm, studio-shot look comforts the viewer and harks of family movies made in the 60’s and 70’s. It’s a gentle reprieve from the harsh reality penchant of modern cinema.

The detail in the CGI giants is very very good. The close ups of skin tones and textures is amazing. Equally amazing is that, as good as the CGI is, it still looks like CGI. While we would consider this CGI to be ‘photographic’, it’s clear we still have some way to go before it is truly photographic. This is neither here nor there as it relates to the story, however. When the chips are down, story matters, CGI doesn’t. But nonetheless, the computer imagery here is cutting edge.

The BFG is worthwhile entertainment and not just for kids. Adults and children alike will be swept away by this Spielberg/Dahl fantasy that is cute, charming and contains one of the best fart jokes in recent memory.