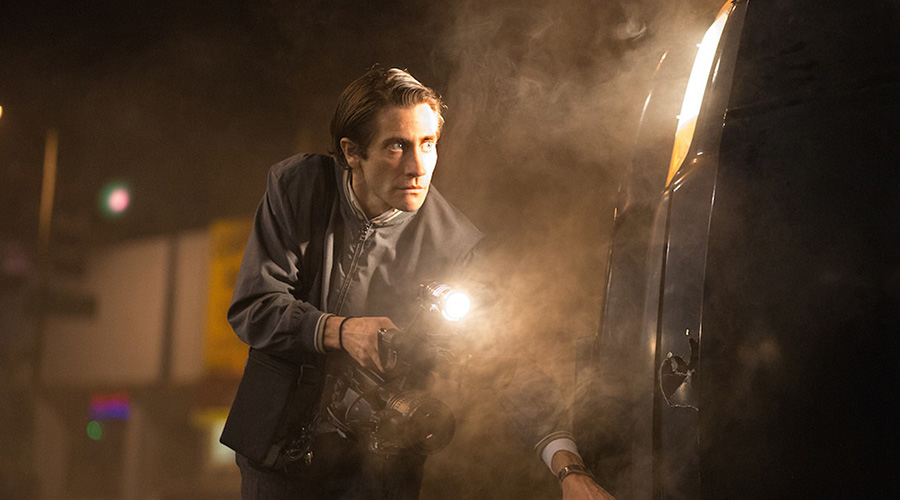 Human suffering makes good entertainment. If you can package it all up neatly.

25 years ago the Hoodoo Gurus released , a song about the ever increasing prevalence of violence in the mass media. Of course, even then it was by no means a new concept. Indeed the song references the ancient Romans as ‘taking out all the guesswork’ in the formula.

With the advent of motion pictures it was inevitable that violence would become a fundamental element of the medium; unsurprising, of course, given violence is a primal staple of human drama. Fewer, though, are the films about media violence; consider Cronenberg’s seminal Videodrome and Kathryn Bigelow’s Strange Days and now Nightcrawler from first time director (and writer of Freejack, Real Steel and The Bourne Legacy), Tony Gilroy. Gilroy also wrote Nightcrawler and it would be reasonable to suggest this is the best film he’s written thus far.

The film follows Louis Bloom (Jake Gyllenhaal), a sociopathic ambulance chaser determined to make his mark on the world. He doesn’t seem to care how he makes this mark but when he stumbles upon his talent for capturing the aftermath of violent events on his video camera, his path is set. Teaming up with the serpentine TV Director, Nina Romina (Rene Russo), the limits of TV decency are stretched towards breaking point as Bloom satiates his boundless ambition to the personal expense of those around him.

Gyllenhaal brilliantly imbues his creepy psychopath with an insectoid energy. Like a train wreck, his performance is painful to watch but you can’t take your eyes off it. Other supposed authoritative characters in the film attempt to manipulate him prior to realising that it is they who are being manipulated, eventually falling foul to his stratagems.

Russo is also in fine form as the hard line TV director who thinks she’s harder than Bloom. Bill Paxton also features in a placeholder role.

The film admirably pulls no punches in its delivery of its thesis. Sidestepping the normal Hollywood tropes along the way, it maintains its nihilistic tone through to its uncompromising yet satisfying final moments.

Sure it’s a freakshow but, honey, ain’t that showbiz?