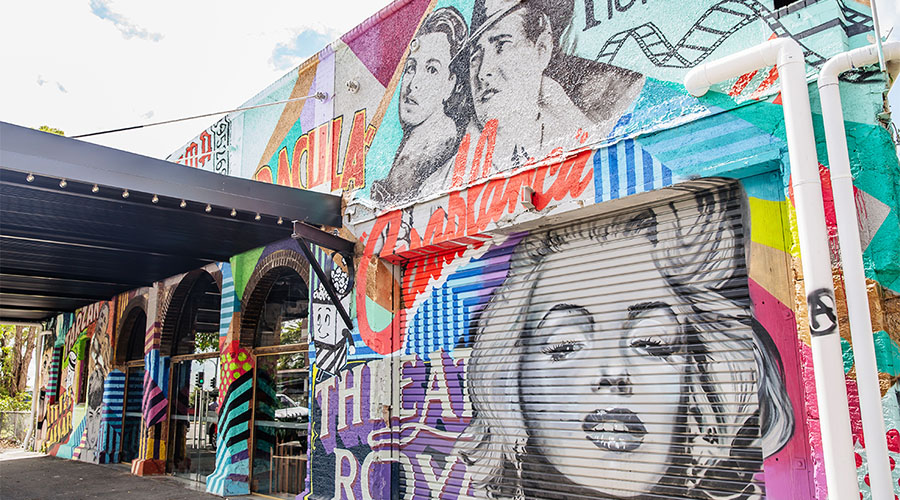 This weekend the movies return to Red Hill!

ONE of the most iconic spots in the inner suburb of Red Hill is about to rise like a phoenix, with the opening of the Red Hill Cinemas this week on a site that has a century-long history of entertaining Queenslanders.

Red Hill Cinemas is the latest project from the Sourris brothers, Stephen and Peter, whose family have been putting the fun into movies for three generations and after acquiring the site in 2017, the final touches are being done.

Located at 14 Enoggera Terrace, the site was originally ‘Pop’s Picture Palace’ back in the 1920s, and remained that way until the mid-sixties, when it was converted into Teen City, a youth club that hosted acts like Col Joye and The Bee Gees.

It was converted into Red Hill Skate Arena in 1965 and stayed that way until it burnt down in 2002, making headlines across the state with many people holding great memories of the location.

Since that time, the building remained derelict, attracting a host of graffiti artists to its inner walls, and it is the families’ connection to the site, plus their love of Brisbane, that has resulted in a host of innovations at the new cinema.

The Red Hill Cinema site also has a sentimental value for the family, as the brothers’ great-uncle owned the building when it was a cinema in the 1950s.

There has been a long list of recycling, heritage and environmental innovations at the new complex during the fit out, some of which will surprise you.

“It was always important to us to pay respect to the site,” Stephen said. “For example, the plant stand that is fixed above the candy bar was the ladder that used to go up to the projection booth.

“We’ve also got some canvas chairs in the foyer area which we sourced online that were originally in a cinema in Gayndah, and there are many other classic cinema artefacts around the place from our family collection.

“We’ve retained all the graffiti where possible, as many of the artists that sprayed the derelict site are now known around the world for their art, such as Sofles and Drapl, plus we have touches such as timber flooring that has been recycled from the lanes of a bowling alley, plus many of the timbers from the original structure that survived the fire now make up the ceiling for the lower area of the building,” he said.

“As a family, we’ve all grown up in Brisbane and we feel it’s important to retain the heritage of the building as much as possible, as a legacy for our customers and all Queenslanders.”

You can’t miss the cinema, as the artwork outside features a nod to the old Pop’s Picture Palace, along with stars of the golden age of Hollywood, such as Marilyn Monroe, Humphrey Bogart, Mickey Mouse and Audrey Hepburn.

The Sourris family has had a history in Brisbane cinema for over a century, when the brothers’ grandfather moved from Greece in the early 1900s and set up cinemas in several locations. Their father James continued the legacy, building the Yatala Drive-in, and the family started the Five Star chain, which also includes cinemas in New Farm and the Elizabeth Picture Theatre in the Brisbane CBD.

Stephen grew up surrounded by a love for movies and wants to continue to offer his customers something more than just seeing a movie. It’s no surprise his favourite movie is Cinema Paradiso.

“We live in an era where everyone has streaming services at home for entertainment, but we believe that going to the movies should still be a special night out,” Stephen said.

“Whether it’s a date night, a movie with your kids or grandkids, or just with friends, I still, to this day, want people to feel that they are having a real night out.

“Going to the movies should be an experience to be savoured, and we hope that Red Hill Cinemas ticks every box for Brisbane moviegoers.”

Red Hill Cinemas opens Saturday November 30 at 10am at 14 Enoggera Terrace, Red Hill, with $10 tickets all weekend to celebrate.

Get your tickets online now at www.fivestarcinemas.com.au/red-hill