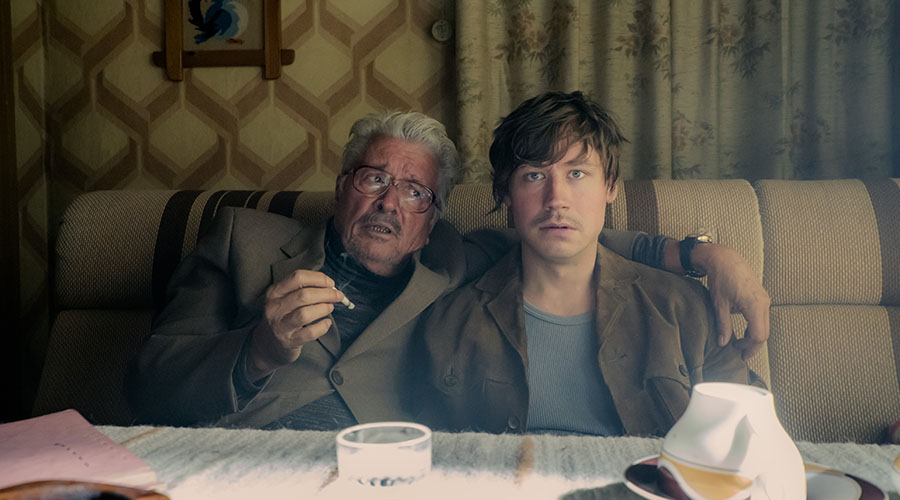 The 2022 German Film Festival Program has been revealed!

Presented by Palace in collaboration with German Films, the 2022 German Film Festival’s full programme has been revealed and features a standout selection of twenty-five films. New German cinema direct from European festivals, a celebratory retro sidebar, Kino for Kids and new Austrian and Swiss cinema all take centre stage

This year’s Festival opens with A STASI COMEDY (Stasikomödie), a fresh release direct from Germany starring festival favourites David Kross and Tom Schilling and set in Communist East Berlin in the early 1980s. Ludger (played by Kross) is hired by the Stasi to infiltrate a subversive countercultural movement in the district of Prenzlauer Berg. After falling in love with the mysterious Nathalie and sleeping with his first target, Corinna, Ludger ends up living two lives – one as an underground poet and one as a Stasi agent – both of which eventually come back to haunt him 30 years later.

Festival organisers are delighted to announce award winning director FRANZISKA STÜNKEL will be attending the festival in Melbourne, Canberra and Sydney as a special guest to present her new film THE LAST EXECUTION (Nahschuss) and participate in a number of Q&As. Based on a true story of the last death sentence in the socialist DDR (East Germany), the film premiered at Filmfest Munich 2021 where it was awarded the prize for new German Cinema.

Simone Baumann, Managing Director German Films (festival collaborator) commented; “Together with Palace, we are pleased to once again be able to present the latest German films to the Australian audience. The colorful collection of German comedies, dramas and films about German history will be a special experience for all fans of German cinema this year thanks to the presence of director Franziska Stünkel.”

The Festival Centrepiece, direct from its Berlinale premiere, is THE FORGER (Der Passfälscher), based on the true story of Samson “Cioma” Schönhaus, a Jewish graphic artist who hid in plain sight in 1940s Berlin, moving freely about the city using fake documents, while secretly forging IDs to help hundreds of others. Louis Hofmann masterfully embodies Schönhaus and leads an exceptional, young cast, directed by Maggie Peren.

This year’s Festival Special Presentation is DEAR THOMAS (Lieber Thomas), a historical monochrome biopic of East German writer and filmmaker Thomas Brasch, starring rising star Albrecht Schuch (Fabian: Going to the Dogs and Berlin Alexanderplatz GFF21). It follows Brasch as he transforms into a prolific writer and poetic rebel but struggles with the reality of censorship in communist East Germany.

To celebrate the 50-year anniversary of the Goethe-Institut in Australia, a specially curated selection of outstanding German cinema from the last five decades will delight film lovers and includes:

The 1979 Academy-Award winning THE TIN DRUM (Die Blechtrommel) remains as strikingly original and continuously surprising as when it was first made. In Volker Schlöndorff’s adaptation of the eponymous Günter Grass novel, a three-year-old is determined to boycott the adult world and remain a child forever.

The 1980 film SOLO SUNNY follows an aspiring singer on tour and in the underground music scene in East Berlin, capturing the East Germany of the 1970s and longings and frustrations of East German youth through its gritty-glitzy visuals and catchy soundtrack.

The 1998 smash hit RUN LOLA RUN (Lola rennt) is directed by Tom Tykwer and stars Franka Potente as the flame-haired Lola. After a botched money delivery, Lola has 20 minutes to come up with 100,000 Deutschmarks.

From 2003 comes the highly awarded audience favourite GOOD BYE, LENIN! In his breakout role, Daniel Brühl stars as a young man who must protect his fragile mother, recently awoken from a coma, from learning that her beloved East Germany is no more after the fall of the Berlin Wall.

2015’s VICTORIA is a technical masterpiece which scooped the pool at the German Film Awards that year. A breathtaking cinematic adventure, shot in one continuous take, it follows a young Spanish woman who finds her flirtation with a local Berlin man turn potentially deadly on a night out with his friends.

Austria and Switzerland’s new cinema is profiled in the ‘Beyond Berlin’ sidebar. New Austrian Cinema, co-presented by the Austrian Embassy, features the Olympic biopic CHASING THE LINE (Klammer) which follows legendary Austrian downhill skiing legend Franz Klammer over several days during the 1976 Winter Olympics. RISKS AND SIDE EFFECTS (Risiken und Nebenwirkungen) is a dark comedy from Austria starring Inka Friedrich and Samuel Finzi which follows a woman’s kidney transplant journey that threatens to break-up her friendships and marriage.

New Swiss cinema highlights include CAGED BIRDS (Bis wir tot sind oder frei), starring Marie Leuenberger and Jella Hasse. Based on a true story, this intriguing 1980’s drama delves into the unlikely alliance between a young lawyer fighting Switzerland’s antiquated prison system and a criminal. MONTE VERITÀ (Monte Verità – Der rausch der freiheit), is a gorgeous historical drama set in the early 20th century that centres on a young mother and a group of society dropouts who search for a free-thinking paradise at Monte Verità.

Based on the bestselling book, the wickedly funny comedy IT’S JUST A PHASE, HONEY (Es ist nur eine Phase, Hase) follows a couple approaching their 50s who set out to regain their long-lost youth. The crime-comedy THE BLACK SQUARE (Das Schwarze Quadrat) stars Bernhard Schütz and Sandra Hüller; two art thieves who have stolen a famous painting plan to meet their clients on a cruise ship and all does not go as planned. In the clever comedy CONTRA a law student prepares for a debating competition with the help of a cynical professor who has been given a final chance to redeem himself after a video of him insulting a student goes viral.

Other new German dramas include MY SON (Mein Sohn), an emotional drama about a young man and his mother who go on a journey together after nearly losing one another; THE GERMAN LESSON (Deutschstunde) about a young man in juvenile detention who is forced to write an essay, bringing memories flooding back of his childhood during the Second World War; THE SEED (Die Saat) an accomplished and gritty drama about a building site manager who toils day to day for the survival of his family and becomes involved in a struggle for social justice and THE PATH, (Der Pfad), in which a journalist father, two children and a dog must navigate a hazardous path to escape the Nazi occupation in France in a tale of courage and solidarity.

Set in the near future, THE HOUSE (Das Haus) is a gripping AI thriller about a journalist and his wife who retreat to their high-tech holiday home, but the smart home’s artificial intelligence soon develops a life of its own.

The Goethe-Institut is pleased to present the popular sidebar “Kino for Kids”, films especially curated for children, teens and families. This year’s programme includes:

MISSION ULJA FUNK – 12-year-old astronomy geek Ulja, armed with a stolen hearse and a classmate as driver, journeys across Eastern Europe to monitor the impact of an asteroid.

SCHOOL OF MAGICAL ANIMALS (Die Schule der magischen Tiere) – A live-action family film that centres on the new girl at an unusual school, where the children receive a magical animal as a companion.

TALES OF FRANZ (Die Geschichten vom Franz) – Family comedy based on Christine Nöstlinger’s bestselling book series about a primary school student, the smallest in his class, who seeks the advice of an influencer much to the scepticism of his best friends.

THE WALL BETWEEN US (Zwischen uns die Mauer) – When Anna from West Germany and GDR citizen Philipp meet in East Berlin in the mid-1980s, it is love at first sight, but the love-struck teenagers are separated by the heavily guarded border.

The German Film Festival will take place nationally from 24 May to 22 June in Sydney, Melbourne, Adelaide, Perth, Canberra, Brisbane and Byron Bay.