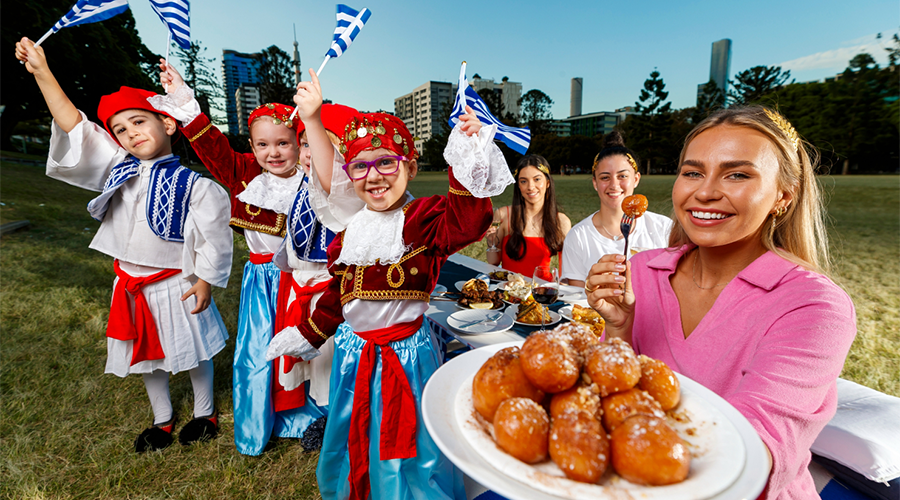 Greece is the word as Paniyiri (finally!) returns to Brisbane!

Lazy afternoon basking in the sun, laughing with friends, drinking wine, while smashing plates of Greek food? It can only be the legendary Paniyiri Greek Festival which is finally returning THIS WEEKEND to its traditional home in Musgrave Park after two long years due to the Pandemic, and the wet weather postponing the event in May.

The official program has just been released on this epic event which features a huge lineup of entertainment.

And did we mention the food? Paniyiri is all about the food, with 20 food stalls serving an incredible array of authentic food from 11 different Greek regions, and where no one judges you if you eat multiple plates of BBQ calamari, souvlaki, haloumi and honey puffs.

And culture, it’s a day and night celebration of Greek dance, music, and mythology. Where you can channel your inner Dionysus, the OG God of wine, while enjoying a Greek wine tasting. Or discover Greek beers or treat yourself to Greek inspired cocktails.

Paniyiri is a place where you live out your Greek fantasies without needing your passport.

Paniyiri is a non-profit event and all funds raised are distributed back to the community via the Brisbane Greek Orthodox Community of St George, Brisbane’s oldest Greek community established in the 1920s. The multiple Greek associations that rely on it to fundraise for their community groups and charity associations, are looking forward to the long-awaited return of the festival.