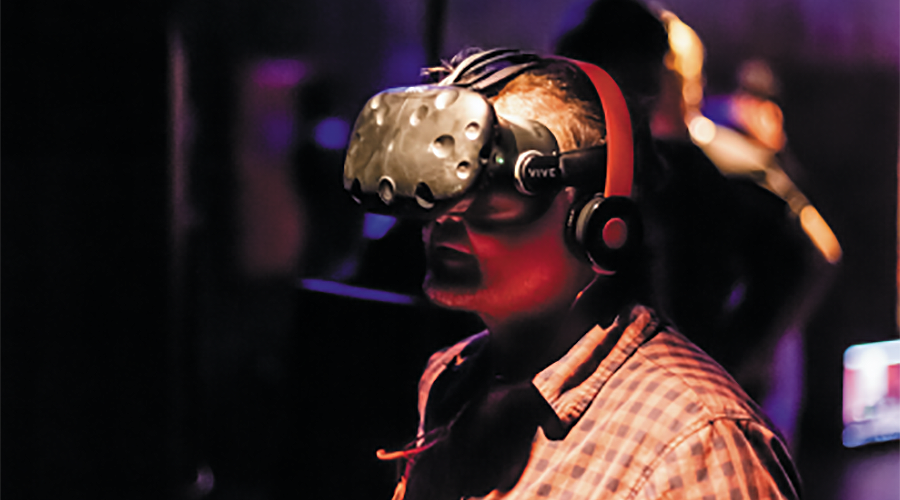 Are you ready to experience the next generation of film?

Selections have been handpicked from across the globe to showcase the next generation of filmmakers and help people experience this ground-breaking form.

The 2018 program includes titled works:
Inside Manus:
Inside Manus harnesses the immersive power of virtual reality storytelling to take the audience behind the razor wire of the Manus Island immigration detention centre to experience the heartbreaking stories of three refugees who came to Australia seeking asylum.

Take Every Wave:
For the first time ever, Take Every Wave: Laird in VR brings the viewer on a hydrofoil board with Laird Hamilton. Join him in Chicama, Peru as he chases perfection on the longest wave in the world.

Biidaaban:
As a work of Indigenous futurism, Biidaaban explores how the languages of native peoples can provide a framework for understanding our place in the world and open up a space for new imaginings of the future.

In Memory:
Locked away in a cold, dark prison cell and no hope of getting released any time soon, all that Jedrick has left are the most precious memories of his beloved. In Memory tells a story of a prisoners mental escape manifested into a physical one as the audience steps inside the memories of a inmate Jedrick.

Rone:
RONE is a distinctive portrait of the titular street artist, whose stunning large-scale portraits of women’s faces can be found adorning soon to be forgotten spaces, acting as a commentary on gentrification and the masculine realm of street art. The VR experience also takes the viewer into a Rone exhibition and inside his studio, giving them a front-row seat to the artistic process behind Rone’s epic murals.

A Thin Black Line:
A Thin Black Line is an interactive narrative with linear and interactive sections. The user embodies a small girl, controlling a pair of IK rigged arms with which they can interact with some objects and the space. The art style is heavily stylised in after the work of Vernon Ah Kee and makes use of custom shaders that emulate a charcoal on paper aesthetic.

Dinner party:
On the night of September 19th 1961, Barney and Betty Hill were the victims of the first widely publicized alien abduction in US history. The Hills, an interracial couple active in the civil-rights movement, were on their way home from a trip to Niagara Falls when they noticed an unusual light in the sky. Shaken by the erratic behavior of the UFO, they headed in the direction of the closest town but never made it.

Sun Ladies:
This immersive live-action documentary brings you face-to-face with a troop of Yazidi women fighters. After ISIS soldiers invaded the Yazidi community of Sinjar, killing all of the men and taking the women and girls as sex slaves, these brave women escaped and started a female-only fighting unit called the Sun Ladies. Together, their goal is to bring back their sisters and protect the honour and dignity of their people.