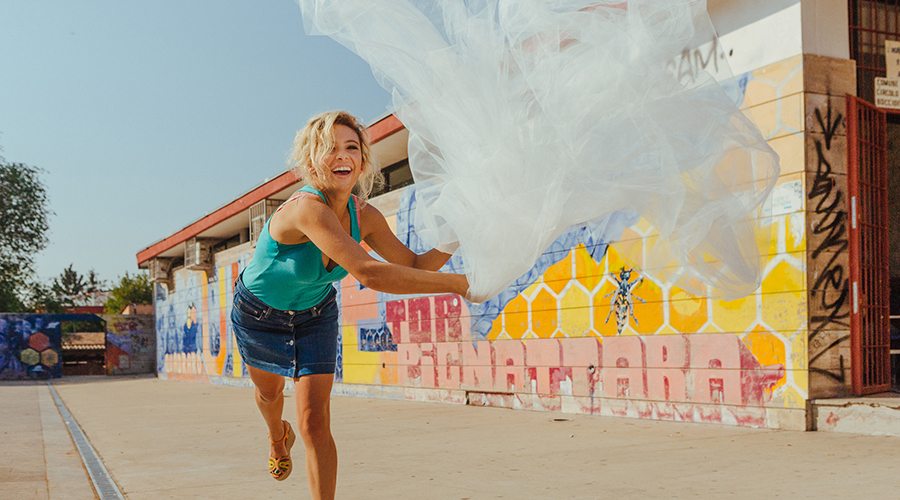 LIFF is thrilled to have Milan-born Italian/Australian actor Greta Scacchi on board as this year’s Festival Ambassador. She’ll be participating in Q&As at selected festival screenings of TENDERNESS (LA TENEREZZA), Gianni Amelio’s latest film, in which Scacchi features. Best known for her AFI Award-winning performance in Looking for Alibrandi, Scacchi also made a name for herself internationally in films such as White Mischief, Presumed Innocent and The Player. In 2013 she was awarded a knight in the Order of Merit of the Italian Republic for her contribution to the Arts. More recently she performed opposite Kenneth Branagh in the stage play The Entertainer in London’s West End.

The LIFF Opening Night Gala will feature the Italian Golden Globes award-winning comedy LET YOURSELF GO! (LASCIATI ANDARE), directed by Francesco Amato (Cosimo and Nicole LIFF13). The film stars the phenomenal Toni Servillo as the uptight psychoanalyst Elia, whose life is upended when he becomes involved with the effervescent personal trainer Claudia (Veronica Echegui) – a woman well-versed in matters of the body but less so of the mind. As Claudia drags Elia around Rome, a series of mishaps ensue, breathing new energy into his tired and predictable life.

LIFF Closing Night will feature a special 20th anniversary screening of the Roberto Benigni’s classic film LIFE IS BEAUTIFUL (LA VITA È BELLA). Benigni, Italy’s king of slapstick, plays Guido a young Jewish man married to Dora (Nicoletta Braschi); together they have a 5 year-old son (Giorgio Cantarini). When World War II breaks out, the family is transported to a death camp. Here Guido tries to shield his son from the horror by convincing him that the camp is an elaborate game, in which points are won against the guards by staying hidden and concealing fear.

Direct from its September World Premiere at the Venice Film Festival, LIFF presents EMMA, the new film by Silvio Soldini, best known for the 32-time award winning drama Bread and Tulips. Teo is an elusive womaniser who works as a creative in a trendy ad agency. Emma is an osteopath, blind since she was 16. When the two first meet at an event held in total darkness, Teo is mesmerized by Emma’s voice. Emma, freshly out of her marriage, is too smart to give into the illusion of Teo’s affection, but he seems like the perfect man to engage in a bit of carefree fun with. LIFF is thrilled to bring this romantic comedy to Australian audiences so soon after its world premiere.

From Edoardo De Angelis, the director of Perez (LIFF15), comes the David di Donatello Award-winning INDIVISIBLE (INDIVISIBILI). Aided by terrific break-out performances by real-life twin sisters Angela and Marianna Fontana, the film is the story of conjoined twin sisters, 18-year-old Daisy and Viola, who are gifted with beautiful voices and often sing at local functions. Their father, a seedy small-time businessman, has turned them into an entertainment act to support the family and ultimately fill his own pockets. Tensions arise when a chance meeting with a doctor reveals that the twins can be safely separated.

Premiering in Directors’ Fortnight at the Cannes Film Festival, THE INTRUDER (L’INTRUSA) follows  Leonardo di Costanzo’s Venice Biennale award-winning debut The Interval. A thoughtful and persuasive study in the limitations of compassion and the hard-won nature of trust, the film focuses on combative social worker Giovanna. Running an after-school care centre, Giovanna is asked to protect a young mother and her two children, confronting her with a moral dilemma that threatens to ruin her work and her life.

SUN, HEART, LOVE (SOLE, CUORE, AMORE) is Daniele Vicari’s sensitively observed study of a woman named Eli (Isabella Ragonese, La nostra vita Opening Night LIFF10). A loving mother to her children and devoted wife to her unemployed husband, Eli manages to find a job in a cafe but it’s two hours away from her home. The hours are long but without any other job prospects, she embraces the opportunity. This is a social realist drama that powerfully encapsulates the toll the economic downturn is taking on Italy.

In AFTER THE WAR (DOPO LA GUERRA), the tranquil life of an Italian ex-left-wing-terrorist who started anew in France is upended when the law preventing his extradition is unexpectedly lifted. Opting to flee Paris with his 16-year-old French daughter, his life and that of his estranged family in Italy, will change forever. Giuseppe Battiston (Perfect Strangers, LIFF16) delivers a complex performance in Annarita Zambrano’s debut, which screened in the Un Certain Regard section at Cannes 2017.

Gianni Amelio’s beautifully shot drama TENDERNESS (LA TENEREZZA) stars festival ambassador Greta Scacchi (Looking for Alibrandi), in a film loosely based on Lorenzo Moreno’s award-winning novel, The Temptation to Be Happy. In post-WWII Naples retired lawyer and proud native Bentivoglio (Renato Carpentieri in an Italian Golden Globes award-winning performance) lives alone in a palazzo, estranged from his adult children. But when a deadly blow sweeps him and his neighbour’s households away, Bentivoglio is offered a way back home to his family.

Katia Bernardi’s SEA DREAMING GIRLS (FUNNE – LE RAGAZZE CHE SOGNAVANO IL MARE) is a joyous documentary about living carefree at any age. In the tiny Italian mountain village of Daone, a group of lively grandmothers led by the straight-talking Erminia begin planning a trip in honour of their Rododendro club’s 20th anniversary. They quickly agree on a trip to the sea, where many of their members have never ventured. But how will they raise enough money so that everyone can wiggle their toes in the surf?

Selected for the Directors’ Fortnight at Cannes, PURE HEARTS (CUORI PURI) is the debut feature from Roberto De Paolis. Agnese, a 17 year old girl living with her devout mother (Barbora Bobulova, Black Souls LIFF15) meets 25 year old Stefano, a young man with a difficult past. As the two youngsters feel their precarious sense of stability slipping away, clinging to each other may be their only chance for survival. Delicately handled, the film features two magnetic performances from its lead actors, Selene Caramazza and Simone Liberati.

SICILIAN GHOST STORY, Fabio Grassadonia and Antonio Piazza’s superb follow-up to 2013’s Cannes Film Festival Critics’ Week prize-winner Salvo (LIFF13), interweaves the richness of fairy tales with the obscenity of Mafia control. In a Sicilian village on the edge of a forest 13 year-old Giuseppe vanishes. His classmate Luna, who’s in love with him, refuses to accept his mysterious disappearance, rebelling against the silence and complicity surrounding his vanishment. A film inspired by the true story of teenager Giuseppe Di Matteo who was kidnapped in 1993 in a bid to silence his father; a Mafia informant.

The writer/director of God Willing (Opening Night LIFF15) returns with the insightful comedy IT’S ALL ABOUT KARMA (QUESTIONE DI KARMA). Giacomo (Fabio de Luigi) is a polite but eccentric heir to an industrial dynasty. A practicing Buddhist, he is led by a retired French scholar (Philippe Leroy) to believe that the reincarnation of his father can be found in Mario (Elio Germano), a materialistic con-man with a hefty debt. The absurd encounter develops into an unusual friendship, as the men discover they have more in common than they think.

IGNORANCE IS BLISS (BEATA IGNORANZA) sees the dynamic duo of Marco Giallini and Alessandro Gassman reunited as warring rivals once more, following their star turns in God Willing (LIFF, 2015). This time it’s a war of modernity as a strict, old-fashioned, tech-phobic teacher Ernesto finds himself at odds with his cheerful and social media savvy young counterpart, Filippo. Their past comes back to haunt them with hilarious results when a young student makes them the subject of an experiment designed to force them out of their technological comfort zones.

I CAN QUIT WHENEVER I WANT 2: MASTERCLASS (SMETTO QUANDO VOGLIO: MASTERCLASS) is the must-see follow-up to 2014’s I Can Quit Whenever I Want (LIFF 14). In the second instalment of the trilogy, the adventures of neurobiologist Pietro Zinni (Edoardo Leo, Perfect Strangers LIFF16) and his academic colleagues take an action-packed turn when they are asked to secretly collaborate with the police to stop a rapidly spreading smart drug scourge.

COFFEE (CAFFÈ), told through a trio of loosely connected stories, explores human relationships through the common drink that wakes up the world in the morning. Filmed across different continents and languages, Cristiano Bortone’s feature is also the first ever Italian co-production with China. A panoramic snapshot of a globalised world in the grip of cultural and economic turbulence, the film was inspired by Alejandro Gonzalez Inarritu’s 2006 Oscar-winner Babel.

Popular TV satirist Pierfrancesco ‘Pif’ Diliberto follows up his hit The Mafia Only Kills in Summer (LIFT 14) with the equally funny prequel of sorts AT WAR FOR LOVE (IN GUERRA PER AMORE). It’s 1940s wartime in New York City where goofy Italian waiter Arturo (Pif) pines for Flora (Miriam Leone, An Almost Perfect Town LIFF17) but she’s betrothed to the son of a New York mafia boss. Arturo’s only option is to ask Flora’s father for her hand in marriage — however, he still lives in Sicily. Penniless but determined, Arturo takes a ‘free’ passage to Italy by enlisting in the U.S. military at the start of the Allied invasion.

Previously announced films also featuring in the 2017 LIFF program line up are:

FORTUNATA, starring Jasmine Trinca (Wondrous Boccaccio LIFF’15) in a performance that earned her the Best Actress Award in Un Certain Regard at the Cannes Film Festival;

SUMMERTIME (L’ESTATE ADDOSSO), director Gabriele Muccino’s (The Pursuit of Happyness) tale of a couple who take in two Italian teenagers to start a new life in America;

Lisa Azuelos’ DALIDA, based on the true story of the acclaimed music icon who gained celebrity in the 50s, singing in Italian, French, Spanish, Arabic, Hebrew and German; and

FROM NAPLES WITH LOVE (TROPPO NAPOLETANO), a joyous romantic comedy about a young boy and his psychologist, which is also available for school bookings.

For the first time Palace will also present a new initiative as part of the 2017 LIFF with six outstanding Italian films in official competition for the Bulgari Critics’ Choice Award.

An official award ceremony will be held on the 20th September when the winner of the AUD $10,000 Bulgari Cinema Award for best film will be announced.

LIFF tickets are now on sale!