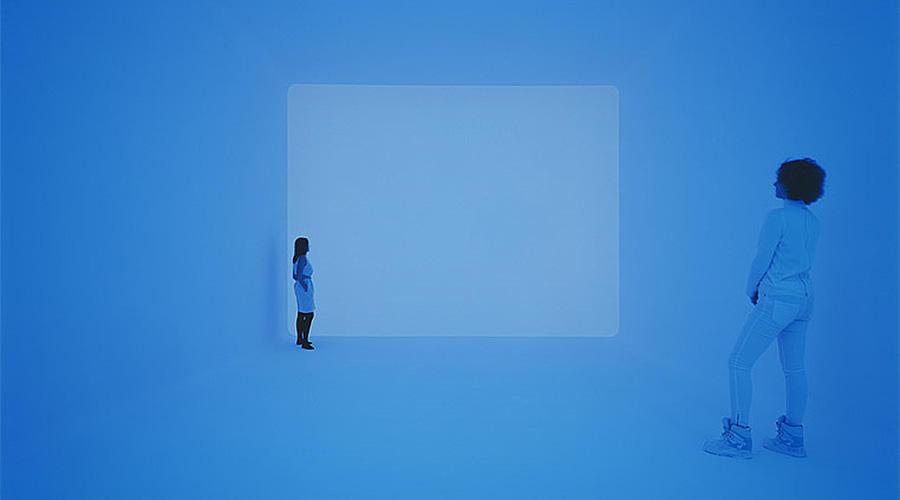 It celebrates Skyspaces, viewing chambers that affect our perception of the sky, and surveys Turrell’s life work, Roden Crater, a naked eye observatory in an extinct volcano on the edge of the Painted Desert, Arizona. The exhibition follows three highly successful shows throughout 2013—at the Los Angeles County Museum of Art, the Museum of Fine Arts, Houston, and the Guggenheim in New York—with works from LACMA’s tour and spectacular installations purpose-built for Canberra.

Since the 1960s James Turrell has made art from light. He studied mathematics and perceptual psychology, and his background as a Quaker and training as a pilot also inform his practice. After his first sculptures using fire, Turrell began to construct projections that produce illusionistic geometric shapes. Afrum (white) 1966, for example, appears as a hovering cube of light.

Raemar pink white 1969 plays with our perceptions, like a large, luminescent pink canvas levitating in front of a wall. Turrell uses a range of fluorescent, tungsten, fibre-optic, LED and natural light. His art is now located across the globe in permanent installations in museums and private collections—Within without 2010, the Skyspace at the National Gallery of Australia, is one of the most beautiful.

In the 1980s and 90s Turrell developed works that expose visitors to total darkness or isolate an individual in a contained environment. After green 1993 is an immersive installation: its intense red, with soft and hard edges, make it disorientating and exquisite. Bindu shards 2010 is a light cycle for one person, a bodily kaleidoscope with patterns of crystals, shards of light, stars, galaxies and nebulae. This Ganzfeld is part of Turrell’s largest and most marvellous series to date. Once inside, saturated in colour, with no edges or corners, we are uncertain of our surrounds—a feeling akin to walking on clouds. This is contemporary art as you’ve never seen before, and promises an experience not to be missed.

We eat light, drink it in through our skins. With a little more exposure to light, you feel part of things physically. I like the power of light and space physically because then you can order it materially. Seeing yourself seeing is a very sensuous act—there’s a sweet deliciousness to feeling yourself see something.