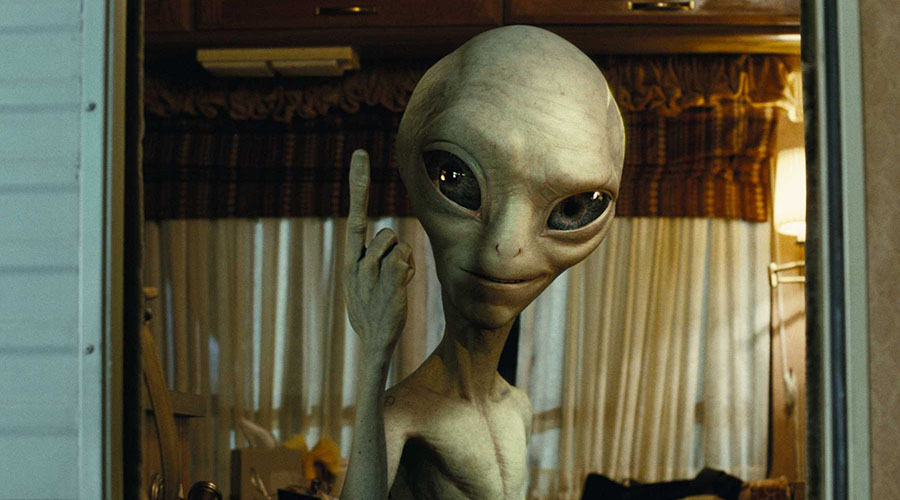 Who doesn’t love a smart arse alien? And not just any alien, but one that has been on this earth for decades, hanging out in Area 51 and telling the US government tall tales. Unfortunately for our little grey friend Paul (voiced by Seth Rogen) he has run out of tales and usefulness, so he escapes their evil clutches where he eventually hooks up with two uber comic book geeks, Graeme Willy (Simon Pegg) and Clive Gollings (Nick Frost).

The two dweebs have rented a huge RV after a visit to Comic Con and are in the midst of a road trip to visit all the cult friendly UFO locations in the western United States. They soon hook up with Paul and the craziness begins (sort of). For a film with such an unconventional premise, it quickly becomes a very conventional road movie.

This conventionality results is a story that is more human nature than Science Fiction and as such has some obvious lessons to impart. This approach however does supply a suitable storyline for a fish out of water tale; it’s not just Paul that is alien to his surrounds.

This film relies heavily on the charms of Pegg and Frost and while this isn’t their best writing and starring project (that is reserved for Shaun Of The Dead) it still has a good number of laughs. It is however a little off putting having such a recognizable voice as Rogen’s as its familiarity occasionally takes you out of the fantasy zone.