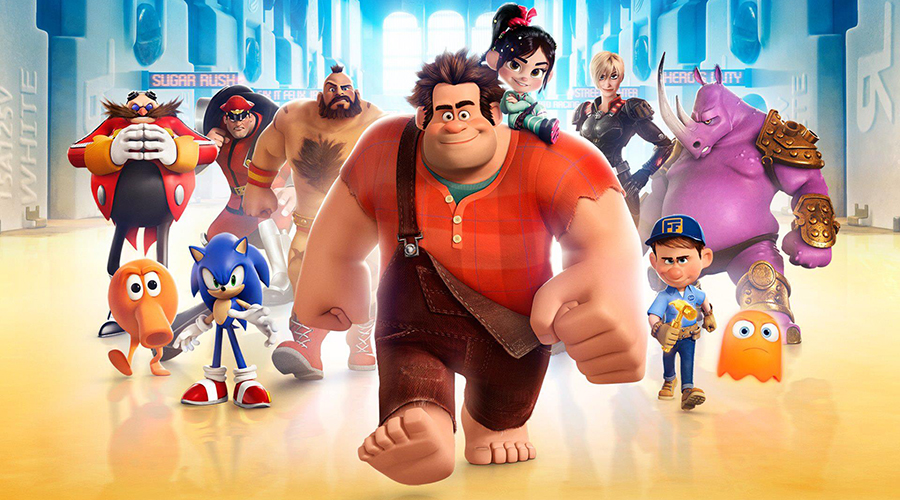 In some ways Wreck-It Ralph is what TRON: Legacy should have been.

One of the core problems with TRON: Legacy was that it completely disregarded the subsequent advances in video gaming since the first film. In an age where the first person shooter is considered de rigueur, TRON: Legacy was still playing with light cycles (Blockade/Surround) and illuminated Frisbees (Pong). Wreck-It Ralph corrects this oversight by internally chronicling the history of video games from the likes of Q*Bert and Tapper to 2D fighters’ Street Fighter and Mortal Kombat to the modern 3D first person shooter, where Wreck-It Ralph is a ‘classic’ conglomeration of Rampage, Donkey Kong and Crazy Climber.

Ralph (John C. Reilly), a bad guy who seeks the social acceptance and profligacy’s of a good guy, teams up with Vanellope (Sarah Silverman), a buggy (in the software sense) character who finds strength in her weakness, in a story which teaches kids that they don’t have to be satisfied with their lot in life, they are free to strive for better.

Highly derivative of other films such as Toy Story, the aforesaid TRON and Who Framed Roger Rabbit, Wreck-It Ralph has barely an ounce of originality but it’s very sweet, fun and has lashings of nostalgia (and some bruising product placement!).

In aping the style of Pixar, Disney has moderate success, although the obligatory proceedings fall shy of par, lacking the literary elegance of much of Pixar’s work. The same could be said of the featurette but it’s a good attempt, though it’s probably best if Disney left this kind of film to its Pixar arm. John Lasseter does executive produce, however.

As a slice of family entertainment, you can’t go far wrong with Wreck-It Ralph. It’s as fun as a ferret in your underpants and it even has a kill screen but, naturally, only the most die-hard filmgoers will stick around to see that!