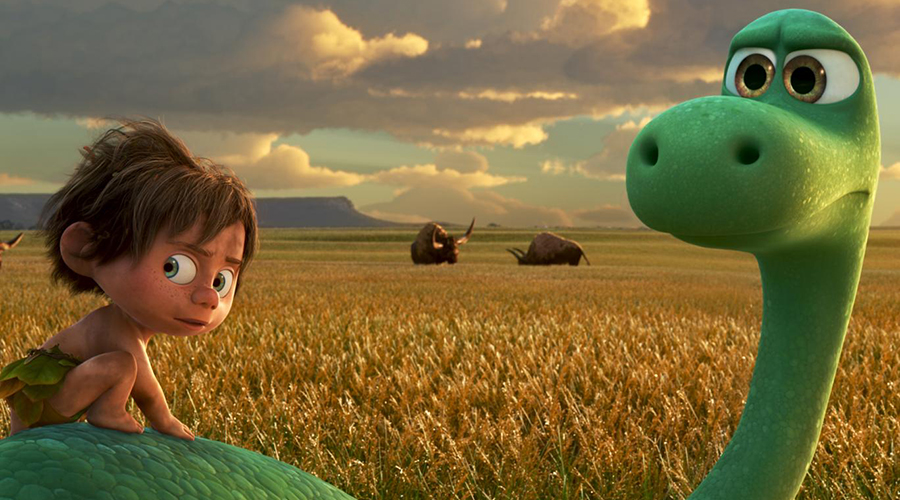 Imagine a world where the meteor missed and the dinosaurs co-habited the Earth with humans and became the dominant species. This is the world of Pixar’s latest effort, The Good Dinosaur, a western flavoured tale about a fearful lad and his human pet learning to survive in frontierland.

Pixar are renowned for producing films of varied levity from the fun Finding Nemo to the much more serious Inside Out which is capable of reducing adults to a blubbering mess. They’re all primarily aimed at kids though, so from a tyke’s perspective they’re all fun (mum and dad are just wusses).

From the outset (and on the strength of the promotional trailer), The Good Dinosaur looks like one of Pixar’s lightweight affairs but upon viewing it quickly becomes apparent that there is a darkness here, which belies the cutesy animation. Indeed following the movie, my 8-year-old daughter stated that this was the first film she’s seen which made her sad – this is a child who giggled and chortled her way through Inside Out!

Arlo, the fearful but ‘good’ dinosaur, and his family suffer some serious hardship throughout this film but it’s all deftly handled within a kiddie friendly package. Even so, the film doesn’t end quite as kids will expect – hence my daughter’s sadness. It’s a mature, realistic conclusion but relax mum and dad, no one dies in the end; this isn’t a tragedy.

The level of environmental detail on display is incredible! Computer generated imagery is getting seriously good and there are times here when you wonder if Pixar have slipped in some live action footage. The CGI is so good that computer generated landscapes adorn the closing credits and you’d swear they were photographed.

The decision to use these photorealistic backdrops behind cartoonish characters is a little jarring at first but you quickly get used to it. It has nowhere near the jarring effect of Wall-E. Ultimately this is an affecting tale about the strength of friends and family. There is perhaps a sequence or two that could be excised to tighten the proceedings a little but it works well as is.