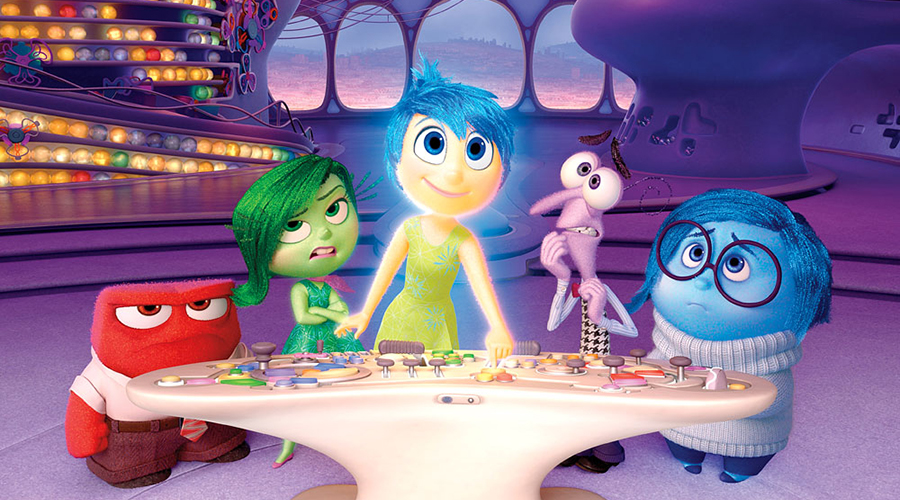 Inside Out Movie Review

Pete Docter is a star of Pixar. He doesn’t have the social profile of John Lasseter or even Brad Bird but as one of the writers of Toy Story 1 and 2 and as the writer/director for two of Pixar’s best efforts, Monster’s Inc. and Up, he is clearly a serious talent worthy of greater recognition. His latest project is Inside Out and it is a more than worthy addition to his already remarkable canon.

It’s no surprise that Disney is promoting Inside Out on the back of Up as (aside from the directorial connection) it is the Pixar film that is most similar to date. Both films employ very adult themes packaged in an easily digestible kiddie format.

The film beautifully visualises the thought processes and memory structures of the human mind, distilling human emotions to five fundamentals – joy, sadness, anger, disgust and fear – and represents these as little people conflicting inside our heads, battling for control of any given situation. It all feels very true to tone and our ability to relate to these conflicting emotions crucially beguiles us to the films protagonist: 11 year-old girl, Riley.

When Riley’s family is uprooted from Minnesota to San Francisco, her difficulty in coping with this change creates internal emotional conflicts. With Joy and Sadness missing in action, Riley is left to negotiate her new circumstance with only fear, anger and disgust at her disposal. Predictably, this doesn’t go well, and we follow the adventures of Joy and Sadness as they attempt to return to Riley’s ‘control room’ and stabilise her emotional rollercoaster.

The style of the visuals and storytelling is heavily flavoured by the likes of Alice in Wonderland and The Wizard of Oz and some sequences are suitably downright trippy and dreamlike.

But despite all the cutesy animation and funny hijinks, as an adult viewer, there’s no escaping the major theme here of an 11 year-old girl whose bout of sadness thrusts her into depression and potential homelessness. It’s a heady theme indeed, especially for a kid’s film, but fear not, a happy ending awaits you at the film’s conclusion so you do get to go home feeling good about it. Thankfully the kids just go along for the funny ride and are spared the emotional trauma suffered by mum and dad.

Inside Out is set to stake out a very special place in children’s literature. It’s a film squarely targeted at kids but it doesn’t shy away from the hard realities of life. It shares the shelf with Maurice Sendak’s Where The Wild Things Are and Shaun Tan’s The Lost Thing as stories that will mature in a child’s eyes as they grow older. This is no small achievement and as such Pixar have created something very rare indeed. I very much look forward to seeing my eight year-old watch this movie in the decades to come and to experience her gradual realisation as to what this story is really about. I hope (and expect) it mirrors my own experience with Sendak’s masterwork.

As a side note, the preceding short, Lava, is one of Pixar’s lesser efforts – it’s kind of creepy, actually, though I expect it’s rooted in Polynesian mythology – but thankfully this is in no way forecasts the quality of the following feature.