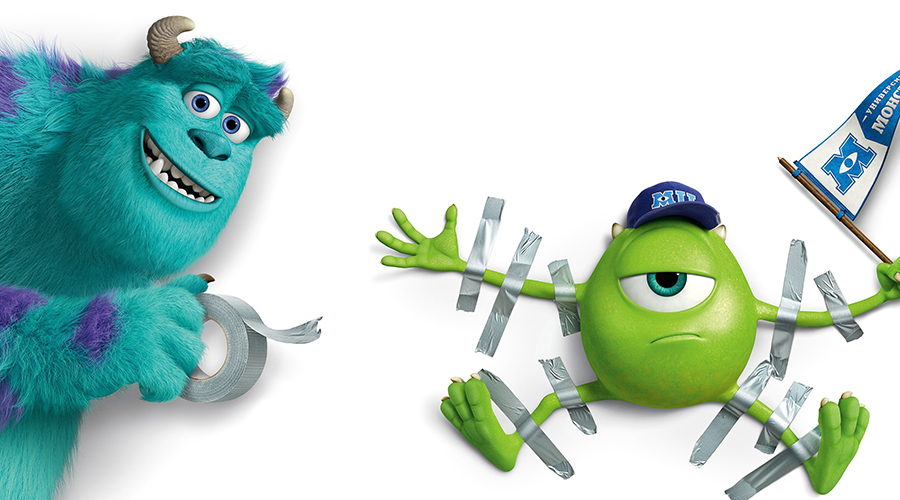 Monsters, Inc. was Pixar’s third animated feature and remains one of the jewels in their crown. Like Toy Story before it, it took a simple idea (in this case, monsters under the bed) and showed us the previously unseen point of view of the monsters doing the scaring. And it turns out that they’re not that scary after all and they’re merely doing their jobs: collecting children’s screams and harvesting the energy therein to power their city. Indeed, they’re actually scared of us. It was a neat idea and a thoroughly unique one that debunked the scary-monster-under-the-bed myth.

So it is that Monsters University arrives with much anticipation. The sequel has some mighty shoes to fill and sadly it falls some way short as it is surprisingly bereft of new ideas. What is presented here is simply a ‘further adventures of Mike and Sully’ film that could easily have gone straight to DVD.

The film channels the frat movies of the eighties. While that seems like such a great idea in theory, the potential remains largely unrealised here. Taking most of its cues from Revenge of the Nerds, we see Mike and Sully teaming up with the university geek fraternity to win the day against all odds. What could have been an excellent dual level adult/child animated comedy (a genre pioneered by Pixar) disappointingly remains a resolute kids’ flick.

This is Pixar sleepwalking. Monsters University is the Cars 2 of Pixar’s Monster franchise; it’s an entertaining children’s movie, but it could have been (and should have been) so much more.