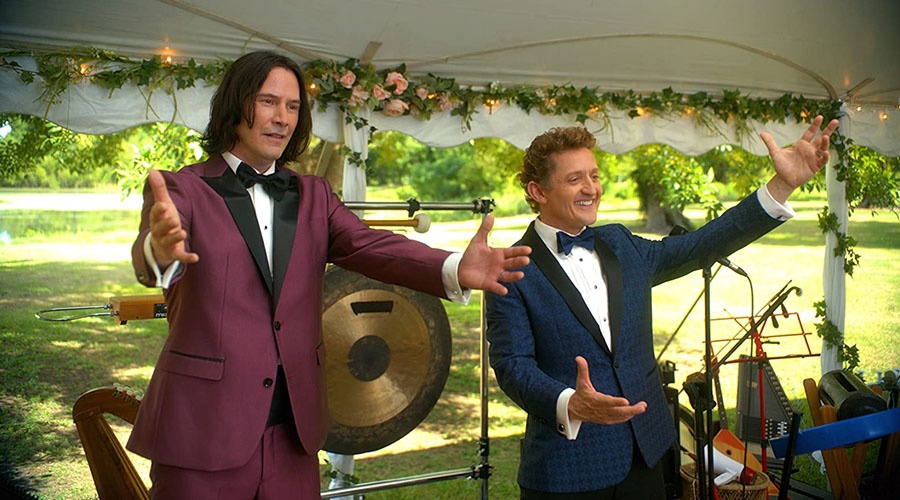 With a take on youth culture that has spawned many imitators, Wayne’s World and Harold & Kumar immediately spring to mind, the original Bill & Ted film was a milestone movie experience. It had its sequels but they lacked the simplistic charm of the original effort. Now over thirty years later, it’s time for another pull at the bong.

First, it must be said that the initial appearance of Bill (Alex Winter) and Ted (Keanu Reeves) slightly jars the senses with how old they actually look but that soon plays into the film’s storyline. The movie years have not been kind to the duo and their successes and failures are laid out for all to see.

It’s their daughters this time out that actually become the heroes of the day and Billie (Brigette Lundy-Paine) and Thea (Samara Weaving) have engaging energy together that adds a lot to the work. Their attempts to save the day provide the film’s most satisfying elements. When the girls recruit Mozart, Jimi Hendrix, and Duke Ellington for the house band, you know you are on to something sweet.

Bill & Ted Face The Music is unchallenging and borders on being a touch too simple, but it’s also the perfect film to counter these overly complicated times. Groove on Jimi jamming with Wolfie and Duke and pine for the presence of George Carlin, good fun is where you find it, just don’t look too deeply.