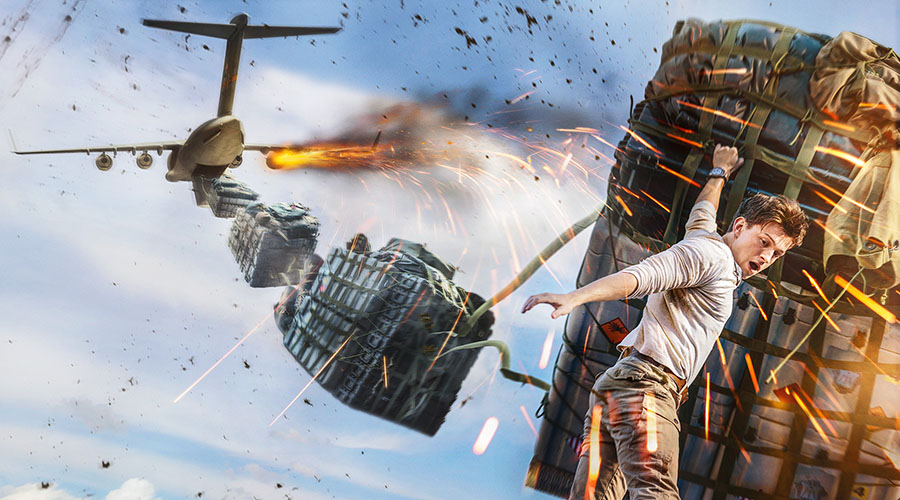 Basing a movie on a video game is always a fraught proposition and Uncharted is the latest example of the good and bad aspects of that approach. It features elaborate set pieces that should have the ability to induce a sense of real tension in the audience but these moments of risk are so easily resolved it quickly dissipates any real sense of danger.

If this mirrors the action of actually playing the video game, then this approach makes a little more sense. As it is the film’s main momentum is built around the on-screen chemistry of its two male leads, Tom Holland and Mark Wahlberg. Wahlberg plays Victor Sullivan a self-centred veteran fortune hunter and Holland’s Nathan Drake is the starry-eyed newbie.

The two main female characters played by Tati Gabrielle and Sophia Ali are not given that much to do but they do use what little screen time they have effectively. They engage in several kick-ass fight scenes and dupe the boys with quite a number of double and triple crosses. Antonio Banderas also hangs around as the resident bad guy.

It’s mostly harmless fun but really does strain your suspension of disbelief to breaking point. I guess not being a gamer might be a disadvantage in your enjoyment of this film as all the gamers I know universally praise the Uncharted series as an outstanding video game. Too bad that level of engagement and excitement is lessened by its transfer to the big screen.