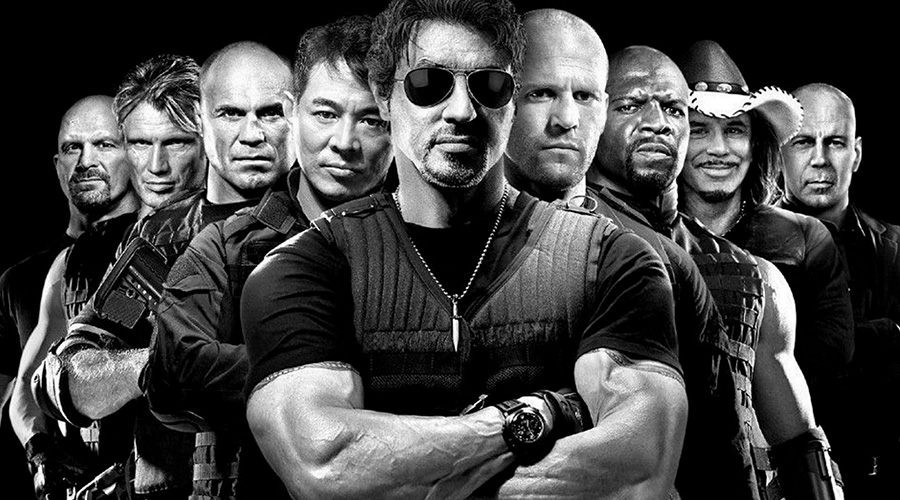 When your movie is comprised solely of (almost) every aging hard man in Hollywood, you probably shouldn’t get them to talk too much because chances are their deliverances will be somewhat less than spellbinding.

Which is why it is especially perplexing that The Expendables has so many talky bits in it and lengthy ones at that. Do we really care about Jason Statham‘s endless diatribes on his lucklessness in love? Um… no. Do we care about how Randy Couture got his cauliflower ears? Hmmm… not really. Do we want more shooty bits and explosions? Oh, yes please!

Sly Stallone‘s new flick is the epitome of WYSIWYG movie making, what you see is definitely what you get. With an all-star gym-jockey cast which includes Stallone, Statham, Li, Lundgren, Rourke, Austin, Willis, Schwarzenegger and Eric Roberts as the bad guy, what more could we want? (Well, I suppose JCVD, Segal, Rutger and Norris would be nice but, hey, let’s not spoil ourselves!) The plot revolves around a group of hard-ass mercenaries who head to a small island in the Persian Gulf to do… something. It doesn’t matter, the point is they get into trouble and then get to shoot lots of folk and blow shit up and that’s all we care about. Slight disappointment in the lack of a Stallone/Lundgren grudge fight – it comes tantalisingly close but, alas, no cigar. The Rambo-ish, over the top cartoony violence does not disappoint, however.

How do you top a movie like Rambo (the circa 2008 version)? Well, you grab a dozen odd Rambos, throw ’em into one movie and press play. The result is predictable and less than the sum of its parts but it is a satisfying slice of beef (and cheese) cake nonetheless.