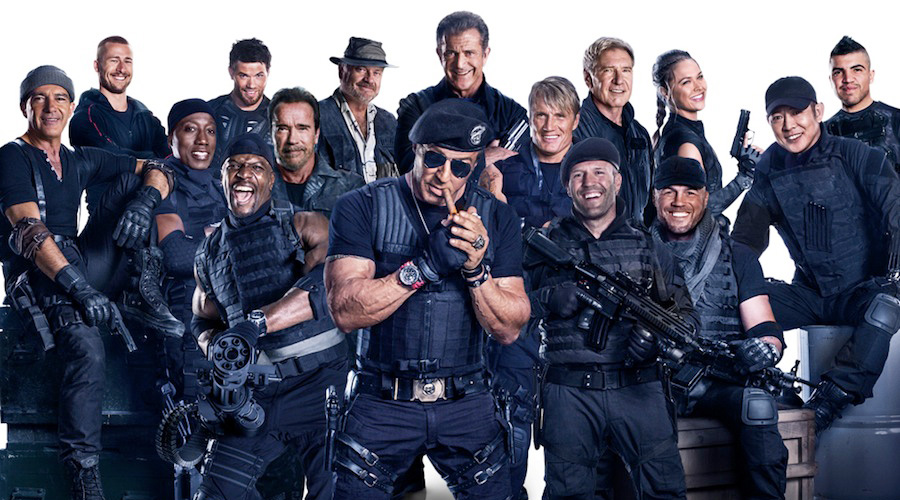 The third film in Stallone’s mega action cast flick has Rocky on a suicide mission to catch Mad Max and this time it’s serious.

I mean it was serious the last two times too but this time it’s even serious… er. Indeed this mission is so dangerous that Rambo sacks his current geriatric crew in favour of a new younger mob. Apparently there’s greater honour in leading young folks to the slaughter than it is to lead old folks… or something like that… but, hey, as long as it’s a good rollicking fun time, who cares?

And this is fun! Good clean silly fun with a dash of violence that teams up the best assembly of vintage action stars ever seen. Rocky joins hands with the likes of Ivan Drago, Bacon and Blade and by the end of it even Conan, Han Solo and El Mariachi are in on the act. The new young guns are probably famous for some prior project (though I’ve never heard of them) and obviously this is Stallone’s attempt to bloody some individually picked up’n’coming action stars. Which makes the film somewhat of a vanity project for Sly but, hey, when was The Expendables anything other than a vanity project? And as long as it’s fun who cares?

With the generationally diverse cast, old school is pitted against new school; new technology versus muscle and there’s plenty of comic nods between 80’s style action and the new breed of technology driven action film. As a result, there’s something for everybody and the film has wide, intergenerational appeal.

Gibson makes a great bad guy and is the highlight of the film in terms of performances. Everybody else efficiently chews through their dumb lines, dropping gags, ribbing each other, referencing the grand old days of 80’s action moofies and Arnie gets to sprout lines like, “Get to the chah-pah!” as often as possible which is really cheesy and exactly the reason why we watch films like this.

Is this a good movie? No, it’s actually quite awful. But as long as it’s fun, who cares? It’s sense of fun more than makes up for its shortfalls.