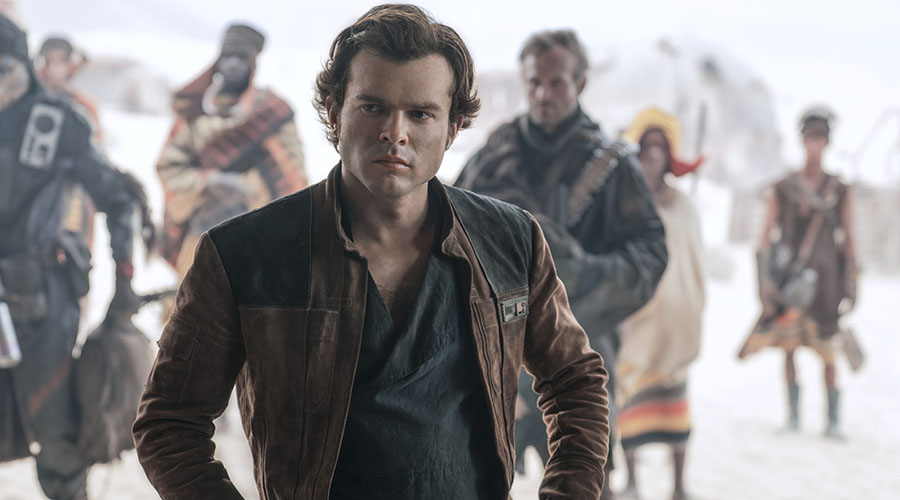 As Disney continues to fill in the gaps in the back stories of the Star Wars’ universe, we now have the arrival of Solo: A Star Wars Story. It’s a fast and fun chapter with more than a few contrasts. It answers some key questions while creating some interesting new ones.

Solo of course refers to Han Solo, he of roughish charm and one liners. In early chapters, Harrison Ford made the role his own and now Alden Ehrenreich (Hail, Caesar! & Beautiful Creatures) gets the chance to put his own stamp on the role. Unfortunately his character is the least developed in the film and the roughish charm inherent in Ford’s take is mostly missing. When Ehrenreich as Solo claims he is an outlaw, it’s a stretch to believe as per the actions that have come before.

That being said, the film, like some in the cannon, places action over character development and in this department, Solo has no trouble entertaining the troops. The film uses a surprisingly under lit first reel and dark tone before expanding the palette in both colour, light and story.

Taken as a chapter in an ever expanding book, Solo fills in a few gaps and through a few key surprises sets up some interesting story telling opportunities. It’s a solid work from a very consistent director, Ron Howard, it does make one wonder though if the supposed irreverence of the early directors take on the film would have produced something a little more transcendent.