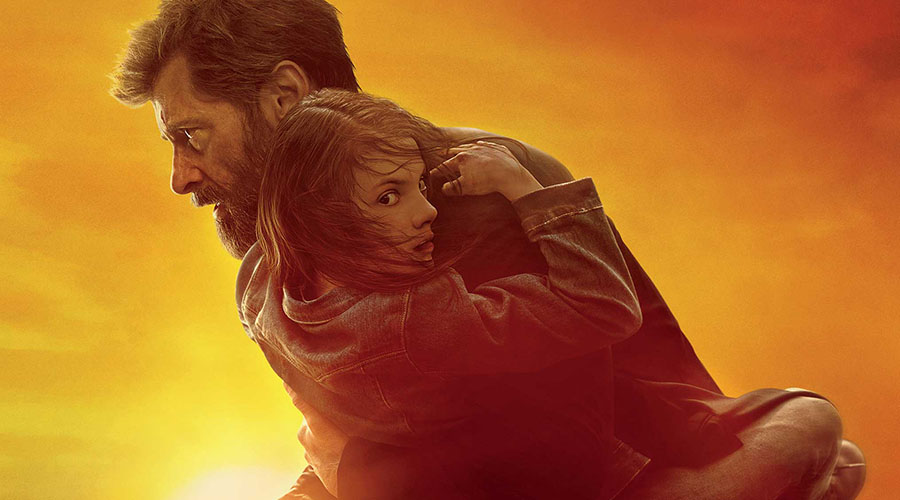 Set in the future where mutants have all but been eradicated, an aging and ailing Wolverine (Hugh Jackman) is shacked up with a mentally debilitated, nonagenarian Charles Xavier (Patrick Stewart) and mutant tracker, Caliban (Stephen Merchant) in remote, desolate Mexico – the last of their kind, apparently. That is until 10 year-old Laura (Dafne Keen) enters the picture with abilities that are remarkably like the Wolverine’s. Cue another nefarious government plot to genetically engineer and control mutantkind.

The great thing about the Wolverine spin off films is that they’re more humanist drama/action movies than they are traditional comic book adaptations. This applies even to the much-derided X-Men Origins: Wolverine. They represent a maturation of the comic book films that are freer to explore other genres outside the literally derived, primary-coloured storyboard format.

James Mangold’s two Wolverine films – this one and its predecessor, The Wolverine – are a particular case in point. Absent are the ridiculous spandex suits which would be more at place in Strictly Ballroom, and in their place are civilian clothes, gritty drama, bloody violence and even (gasp) boobs! The gratuitous brutality and potty-mouth language are more at home in a Tarantino flick than an X-Men movie and that’s not where the comparisons with Tarantino end. Interestingly, Mangold’s films share much with Kill Bill Vol. 1 & 2 with his first Wolverine film being an ‘Eastern’ (samurai/kung fu) and his second, a Western featuring our favourite grumpy lone wolf bladeslinger reluctantly defending those in need. Indeed Mangold even goes so far as to explicitly cite the Western classic, Shane, as if to drive home the reference. This does, however, make these two films an admirably unique duo within the Marvel film canon.

Both Hugh Jackman and Patrick Stewart have publicly confirmed their departure from the X-Men franchise with this film and Logan is a good one to go out on. Largely casting off the shackles which usually restrict seasoned thespians in these types of roles, both have the freedom here to explore the idiosyncratic minutiae of their respective characters, allowing them to shine as performers like no other Marvel film before it. And we know from Jackman and Stewart’s performances elsewhere that they are certainly up to this task.

The other standout is young Dafne Keen who gives a performance reminiscent of Natalie Portman in Leon. While she may not say much, it is a fine internalised performance with much depth. There’s a future career to look out for.

There remains a couple of major plot point omissions (continuity errors, perhaps?) such as how on earth did Wolverine get his adamantium claws back after they were so dramatically excised in the previous solo film? And there still hasn’t been a straightforward explanation as to how Xavier returned from being obliterated by Jean Grey in X-Men 3: The Last Stand. (Yes, I know they implanted his mind in another body – but the same crippled body…?) Given that these are two major features of the story arc, it’s amazing that Mangold manages to get away with it. But it’s a measure of his overall level of quality that we can so easily turn a blind eye to these seeming blatant oversights.