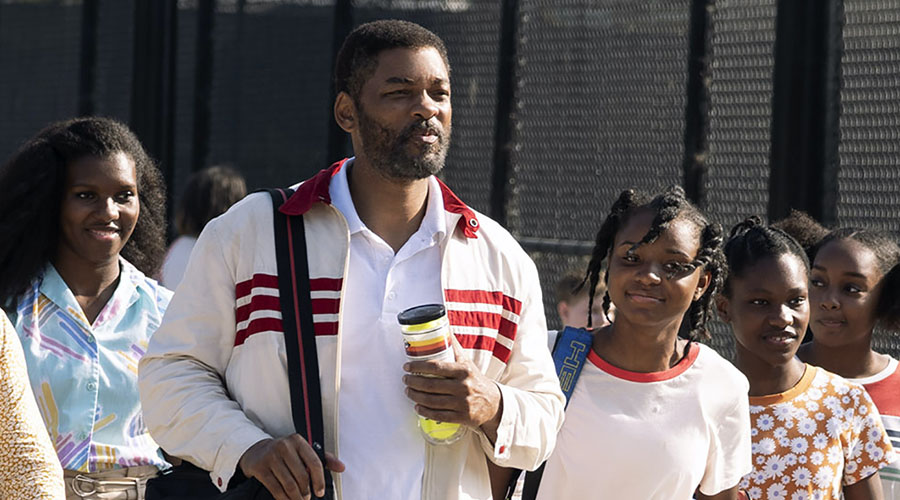 More a story about the virtue of family than the virtue of sport, King Richard tells the tale of the tennis powerhouse Williams sisters and their father Richard. Will Smith is unafraid to portray the man, flaws and all as he instills in his daughter a profound sense of self-worth. He lights a fire in the girls but their ultimate accomplishments are all their own.

The sisters, both Serena and Venus’ ascendancy into the upper echelon of the tennis world, a world of old money and privilege has been encouraging to behold. Their start in more than humble beginnings only makes their accomplishments more vivid. This film highlights the struggles that the family faced with the entrenched attitudes at the time and the financial hardships as well.

Once the sisters’ tennis prowess becomes known outside the local community, the story shifts locations from the practice courts in Compton (a city adjacent to Los Angeles) to a training facility in Florida run by Rick Macci (Jon Bernthal). It’s at the point that the difficulty becomes keeping the girls from being taken advantage of by the commercial power players in the industry.

The film’s main focus on the Williams sister’s early years before their unrivalled success on the professional circuit cast a light on their strife more than their successes. There could have been a more complete picture presented had the filmmakers chosen to reward us with more on-screen accomplishments rather than the obligatory text-based codas as film’s end.