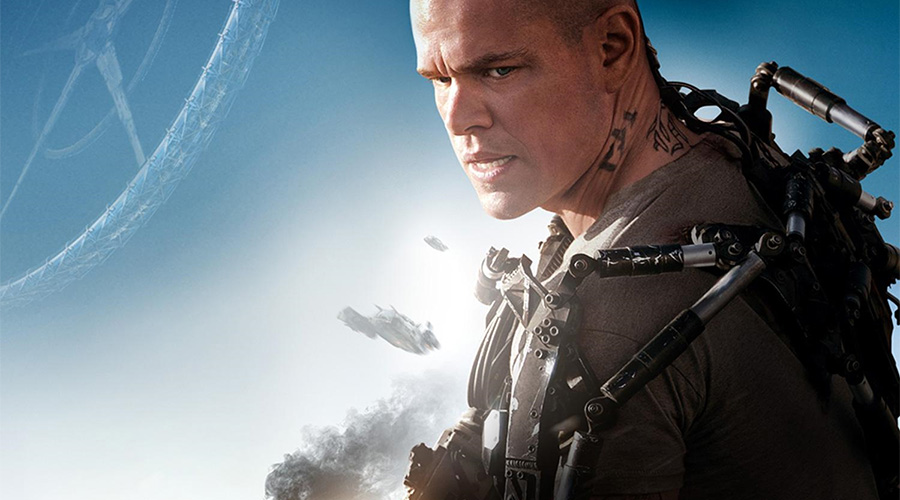 The problem with Neill Blomkamp’s first feature, District 9, was how blatantly political it was. The problem with Elysium is how blatantly political it is. Watching Blomkamp’s films you get the distinct impression that his political message is more important than his movie. Because there is so little substance to his story, the film comes across as little more than blatant socialist propaganda.

The story follows Max (Matt Damon), a downtrodden underclassman vying for asylum in the privileged celestial city of Elysium. Like his poverty-stricken brethren, Max is an oppressed would-be saint crushed under the iron heel of an elitist upper class that is evil beyond redemption.

Emotionally-laden key words such as ‘homeland security’ and ‘no-fly zone’ are bandied about to ensure we don’t miss the point and one of the bad guys is Apartheid incarnate with his penchant for authoritarian violence and his thick South African accent; he even has a South African flag on his assault ship just in case you missed the reference. Subtlety is not a brand Blomkamp trades in but social and racial stereotyping apparently is.

Of course cautionary tales of social injustice are almost de rigueur for science fiction film and literature but they work best when embedded within the story. With Blomkamp, the political message dwarfs the story.

On the plus side, there is one great action scene in the middle of the film that is nail-biting stuff before launching back into mediocre faux sci-fi action territory for the final showdown between good and evil.

Amazingly Jody Foster foregoes her native Southern accent – who would have thought that possible? – and delivers the best performance of the cast despite having little to do beyond being an evil elitist authoritarian bitch. The rest of the cast which includes Matt Damon, Sharlto Copley and William Fichtner are serviceable if unremarkable. Every character here is composed of a singular dimension with the exception of Damon’s rough diamond. I suppose Blomkamp deemed this character the only one worthy of being fleshed out.

As a practical rerun of District 9, those who enjoyed Blomkamp’s first feature will probably glean some enjoyment from Elysium; others will do well to avoid it.