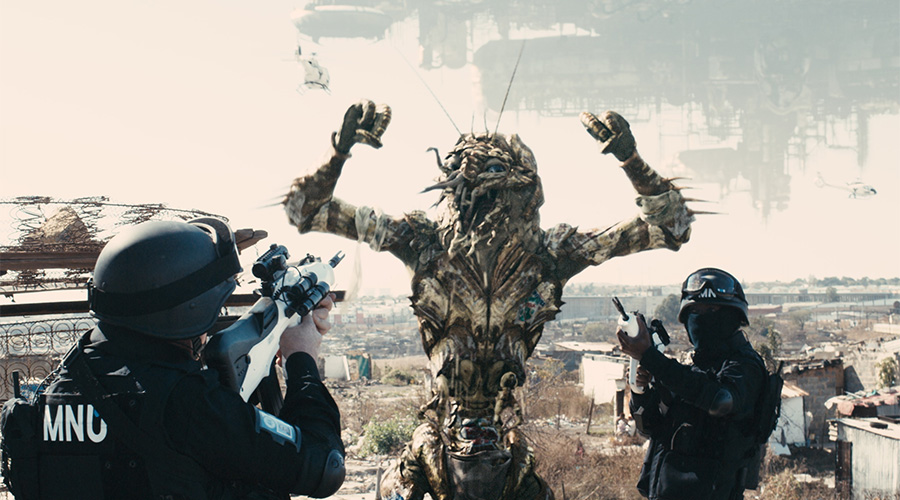 First there was the trailer. A spaceship suspended above a city with sudden bursts of commentary from those who witnessed ‘it’. And then an extraterrestrial with antenna and a face distorted to preserve anonymity being interviewed on why earth was chosen as a port. Then it’s explosions, hysteria and desperation. When there’s so much hype, in the case of District 9 it was done with some stealth and secrecy, the cynics could be excused for expecting a turkey but…

Perhaps taking its cue from Banlieue 13, Pierre Morel’s thrill ride of 2004 set in Paris where the worst offenders existed in a walled-off ghetto, District 9 (set in Johannesburg) follows a similar theme except this ghetto’s populated by aliens with a taste for cat food. Eventually dark influences exploit the residents flavoured by, among other things, interspecies prostitution and with trouble following quickly, the government are left with no alternative but to create a new ‘haven’ for the visitors… District 10. Enter Wikus van der Merwe (played with disarming innocence by Sharlto Copely), an agent for M.N.U. (Multi-National United), who is enlisted to convince the aliens to sign agreements approving their own relocation. Here the dynamic of director Neill Blomkamp’s vision expands into sudden comedy and it drives this spectacle to near-perfection.

I say near-perfection because it opens in an almost catatonic state. At the risk of revealing anything, that sinister trailer is misleading. As District 9 opens, Blomkamp puts his cards on the table fast and it doesn’t quite match with what follows. Styled to look like a documentary (read guerrilla-style), the hand-held cinematography lends the atmosphere a sweaty thickness and while they have a clichéd appearance, the physicality of the aliens (like an anorexic version of the ‘Predator’) are the least of his concerns. It’s the interplay with their hosts that counts here and from this springs the film’s smart sense of humour.

With influences from Alien, Cloverfield, The Fly, and even Transformers, District 9 is going to be remembered. A native of Johannesburg, 29 year-old Blomkamp making an astounding debut here, directs with great assurance and flavours his adventure with a perfect concoction of thrills, scares and action and it’s all artfully underpinned with sentiment. The blending of live-action and CGI is remarkably seamless and after that disorienting beginning we join Copely (what a superb anti-hero he makes) on a dark, disturbing journey that doesn’t flag. A lot will be made of its heavy-handed dissection of racism and it’s all there on many levels but it doesn’t get in the way. That’s a good thing too because with the audiences District 9 will attract, it’s going to get lost in the translation.