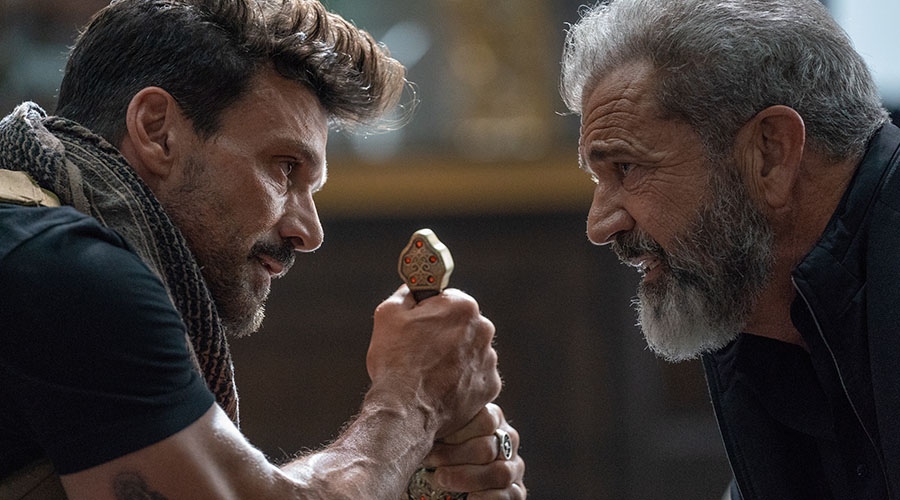 From its highly pixelated opening titles and faux video game-opening, Boss Level sets out to be accessible fun. Roy Pulver (Frank Grillo) delivers a world-weary voice-over as he dispatches a sword-wielding assassin and Gatling gun-equipped helicopter before he’s even had breakfast. His apartment being destroyed by the wayward helicopter crashing into it doesn’t even faze him.

It’s a groundhog day scenario that is peppered with ever-increasing levels of gratuitous violence that ultimately end with Roy’s very unpleasant demise every time. This is until he figures things out and sets out to right quite a few wrongs that exist in his life. He has to reconnect with his son, save his ex-wife Jemma (Naomi Watts) from her evil boss Col. Clive (Mel Gibson), and then save the world, You know, easy stuff.

The science-fiction elements of the story are only there to provide a backdrop to hang the smart ass quips and descents into ultra-violence. It’s violence that is played mostly for comic effect and there is a lot of those kinds of laughs at play here. Grillo does his best with the lines that are given to him and his derisive delivery helps to keep them from becoming too silly.

Non-challenging cinema fills a current need and Boss Level is a lot of fun within those limitations. You get to cheer for the bad good guy and jeer the bad bad guy (it’s way too easy to have contempt for any role Mel Gibson fills) and hope that they keep the world from ending this time around.