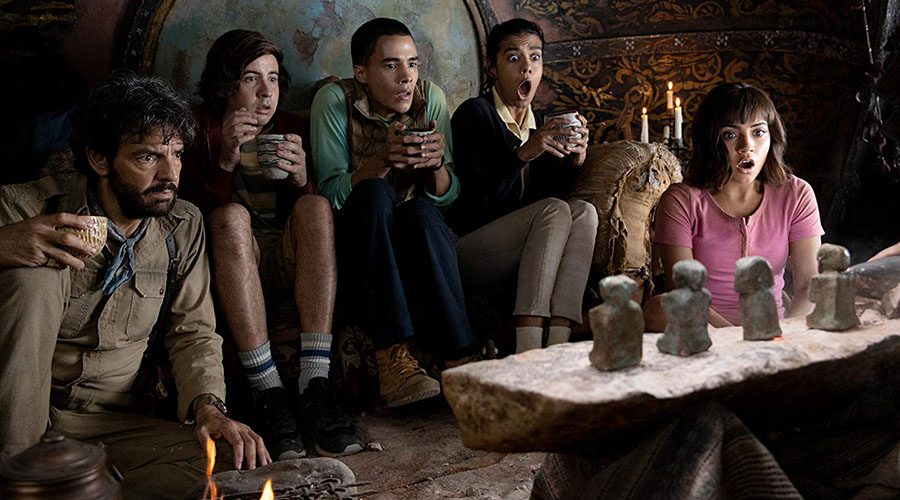 Watch the official first trailer for Dora and the Lost City of Gold!

Having spent most of her life exploring the jungle with her parents, nothing could prepare Dora (Isabela Moner) for her most dangerous adventure ever — High School.

Always the explorer, Dora quickly finds herself leading Boots (her best friend, a monkey), Diego (Jeffrey Wahlberg), a mysterious jungle inhabitant (Eugenio Derbez), and a rag tag group of teens on a live-action adventure to save her parents (Eva Longoria, Michael Peña) and solve the impossible mystery behind a lost city of gold.

“Growing up, I really related to Dora, in the sense that she spoke both English and Spanish. Then, at a young age, I had the same haircut, so everyone called me Dora! When they sent me the script I was like, ‘I have to do this. I’ve been her my whole life!’”
– Isabela Moner

“Like any great family movie, parents will have as much fun as their kids. Lots of humor and lots action! I can’t believe how talented [the cast] is. The first night [after shooting] I went back to my wife and said, ‘I’m really worried [that I’m going to have to up my game] because these kids are really good!’”
– Eugenio Derbez

“I was thrilled to join this cast and be a part of bringing the story of Dora to life. She has been such a positive role model for kids around the globe. The film is so much fun and has a lot of heart, and I can’t wait for audiences to enjoy it this summer!”
– Eva Longoria

“My daughter grew up watching Dora, so I knew her pretty well. But are you the same person at 16 as you are at six? I think the great thing is that, in this movie, Dora kind of is! That’s her charm. She has grown up by herself in the jungle, with just her parents, so the world hasn’t put her down. No one has ever told her she can’t do anything; she’s not lived through social media and peer pressure, so she doesn’t care what people think. And you love her for it.”
– James Bobin