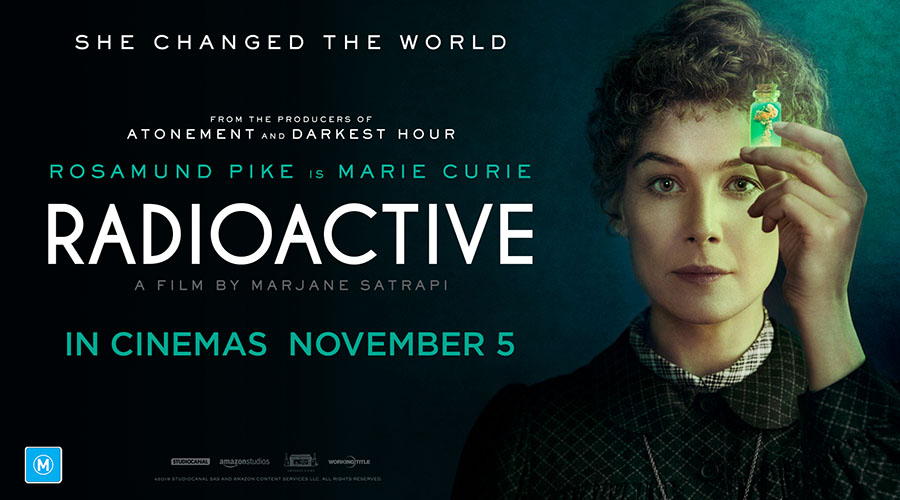 Win tickets to a very special screening of Radioactive!

Thanks to StudioCanal we have five double passes to give away to a special screening of Radioactive!

Radioactive is a journey through Marie Curie’s (Rosamund Pike) enduring legacies – her passionate partnerships, scientific breakthroughs, and the consequences that follow.

In late 19th century Paris, Marie met fellow scientist Pierre Curie (Sam Riley). The pair went on to marry, raised two daughters and changed the face of science forever by their discovery of radioactivity. In 1903, the pair jointly won the Nobel Prize in physics for their discovery, making Marie the first woman to win the esteemed prize.

After the death of her beloved Pierre, Marie’s commitment to science remained unwavering and her work went on to win her a second Nobel Prize, taking with it the responsibility for discoveries which changed the world. This is a bold, visionary depiction of a legacy of an extraordinary life, the transformative effects and ensuing fallout of the Curie’s work and an exploration of how this impacted the defining moments of the 20th Century.

The film is produced by Shoebox Films’ Paul Webster (ATONEMENT, EASTERN PROMISES, SALMON FISHING IN THE YEMEN), together with Tim Bevan and Eric Fellner, co-chairmen of the BAFTA award-winning production company Working Title Films (THE DARKEST HOUR, LES MISERABLES, THE DANISH GIRL, THE THEORY OF EVERYTHING, RUSH).

STUDIOCANAL and Amazon Studios co-financed the feature film, which was filmed on location in Budapest and Spain.

To enter this great competition simply fill out the form below. Please note – these tickets are for a specific event only and can not be exchanged or refunded. The winners will need to be available on Wednesday November 4 at 6:30pm in Brisbane to be able to attend this event at Palace Barracks.

Competition will be drawn August 2 2020, winners will be notified by email.