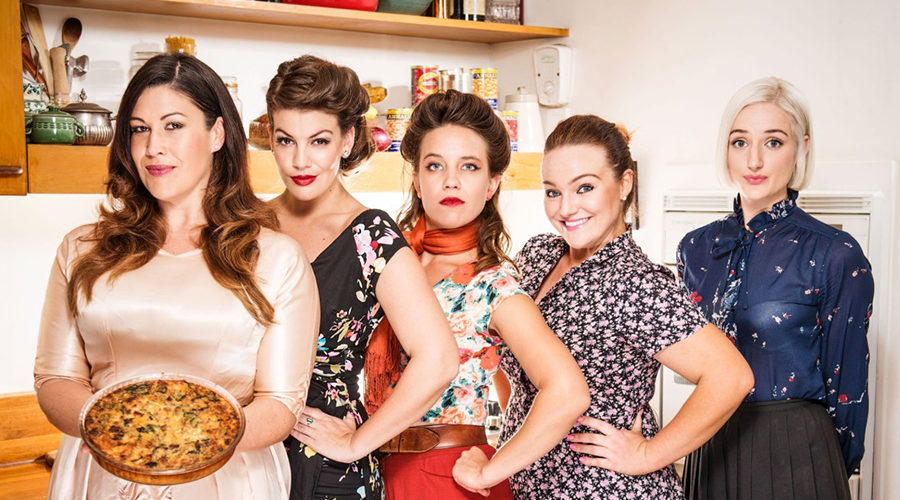 The critically-acclaimed, hilarious send-up of 1950s cold war repression and kitsch culture, ‘5 LESBIANS EATING A QUICHE’, is returning to Brisbane for a strictly limited encore performance!

This riotous show which had audiences in stitches during its Australian première season at the MELT festival in February, will see the merry widows of the Susan B. Anthony Society for the Sisters Of Gertrude Stein return to the Brisbane Powerhouse from June 16-21.

Presented in Australia by Qld based theatrical production company Imprint Theatricals, founded by Nathanael Cooper and Sean Bryan, ‘5 LESBIANS EATING A QUICHE’ finds five women assembled in a church basement (along with the audience) for the 1956 annual meeting of the Susan B. Anthony Society for the Sisters of Gertrude Stein’s annual quiche breakfast.

Catherine Alcorn and Lauren Jackson will return to the show as Lulie and Vern, and attending their very first Quiche Breakfast as officers are: Ashlee Lollback as Ginny, Bianca Zouppas as Dale and Lauren O’Rourke as Wren.

The normally idyllic gathering, where the motto is “no men, no meat, all manners” is upended when the Society’s matriarchs must confront the startling revelation that an atom bomb may be falling on their fair city. As fears are confronted and confessions fly, the chipper ladies stay firm in their commitment that the quiche is a mighty thing and that one must “respect the egg.”

Following the upward trajectory from its début as a short play, ‘5 LESBIANS EATING A QUICHE’ has enjoyed a meteoric rise with audiences and critics.

After wowing Chicago where Time Out Chicago called it “smart, sharp and hysterically funny,” the comedy went on to play a sold-out engagement at the 2012 New York International Fringe Festival, winning a “Best Overall Production” award. This was soon followed by a successful off-Broadway run at New York’s SoHo Playhouse. The New York Times said the work’s “raw and magnetic dementia seems destined to attract a cult following”.