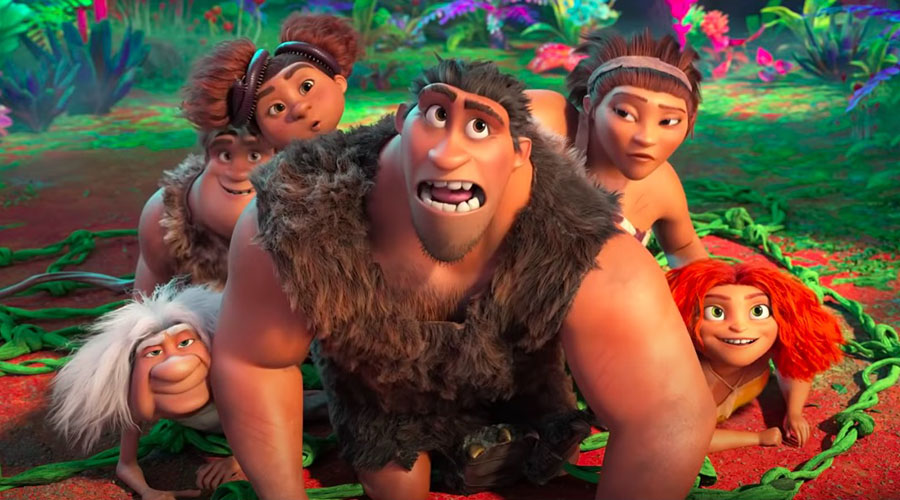 With a stellar voice cast and an overabundance of ideas, The Croods: A New Age tries its hardest to be entertaining. With the raft of films that are actually getting released in cinemas consisting of a large number of lower-budget works that focus on the human condition, it’s nice to have an outright fantasy film to escape to.

The production looks amazing as the colour palette almost sears the eyes. It’s filled with such oversaturated hues, you almost need sunglasses. The story at its most basic level is about outsiders fitting in but this uncomplicated idea is infused with so many elements and gags, visual and otherwise that it’s far from simplistic. If anything it might throw a few too many ideas in the mix.

Recasting the modern family dynamic into caveman times gives the actor a familiar weight to energise the words. And both Peter Dinklage as Phil Betterman (an artisan hipster way before his time) and Emma Stone as super gal Eep are perfectly cast. However having Ryan Reynolds as the main guy, Guy, creates quite a few moments where you are left hanging for a bit of that Deadpool/RR irreverence.

Films like this need to be seen in retina roasting rooms for maximum impact as they are more of a visual treat than a mental exercise. With the escalating costs of films both blockbuster and computer-generated and a smaller window of financial opportunity, it might be a few years for the equilibrium to return. Until then enjoy these works from a time we hope to experience again.