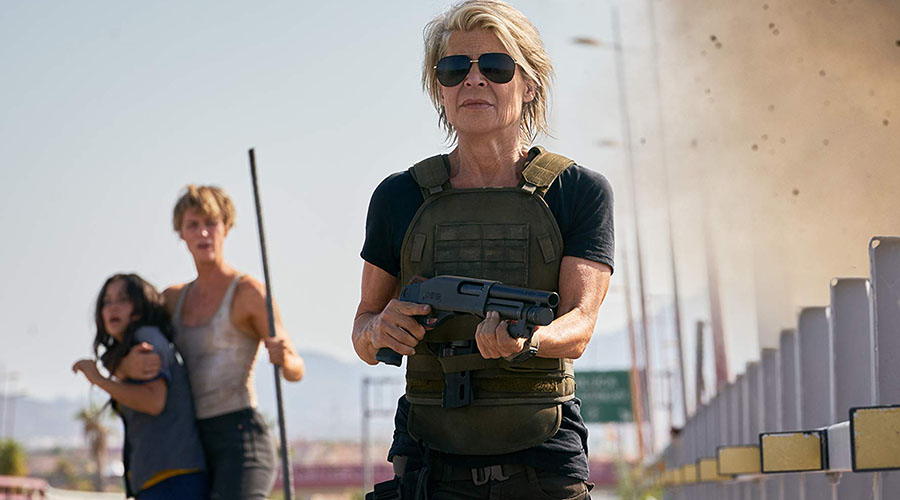 Taking full advantage of the multiple timelines built into the Terminator universe, Terminator: Dark Fate ignores most of the other chapters I the franchise and picks up right after Terminator 2: Judgment Day ended. They even go so far as using CGI effects to recreate a young Arnie and a young Edward Furlong. Starting up after charter two drops viewers in the ideal timeframe to reboot the series.

The ladies, both young and old return to the forefront and it’s a welcome change to see the women being the ones to kick serious butt again. They also bring back Schwarzenegger in a clever and satisfying way. In an acknowledgement to the current level of paranoia about illegal emigrants in America, they have a set piece based in an internment camp on the US border and it’s not a happy place.

The film features a minimal storyline and maximum action and in-line with previous editions, it takes a large number of skirmishes to finally dispatch the new Terminator, who is more impregnable than ever due to some neat new technologies. The’ve also ramped up the visual spectacle and there is a transport plane crash that defies all logic and reason. It’s just loud, raucous and satisfyingly ridiculous.

Will this effort be enough to kick start the franchise as something new and relevant? Only time will tell but returning to having women in the lead roles is a great start. Let’s hope next time out they expand the science to advance the storyline and do something exceptional with this reimagined paradigm.
Rob Hudson
www.facebook.com/foxmoviesaus