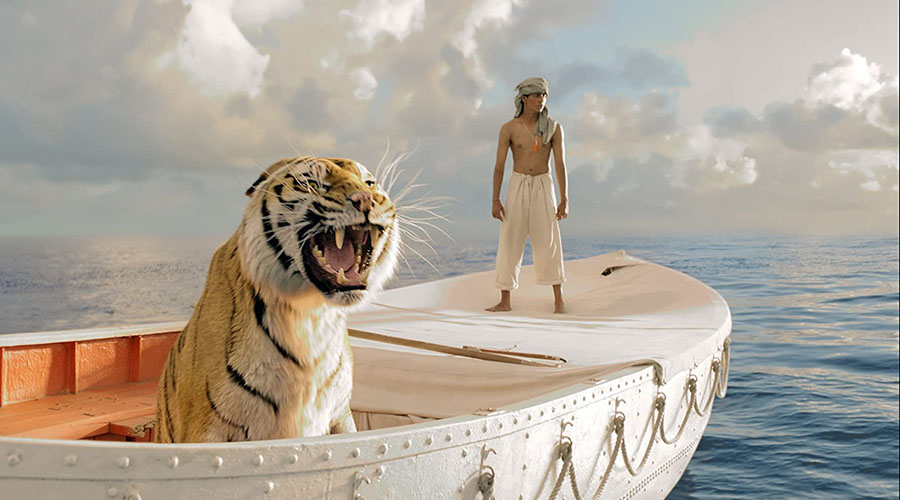 Few directors working today have a more varied or interesting resume than Ang Lee. The Taiwan born auteur has films under his belt as diverse as Brokeback Mountain, Crouching Tiger, Hidden Dragon, Sense and Sensibility and the commercial misfire Hulk but nothing in his back catalogue prepares one for the overwhelming visual beauty of Life Of Pi.

The film is based on the book of the same name by Yann Martel and was considered by many to be unable to be transformed into the film medium; Ang Lee has proven them to be wrong. The film comfortably transitions from live action story telling to an imaginary CGI universe that is so bold and beautiful you often wish the film resided only in that world.

The story revolves around the life of Pi Patel (played as a youth by Gautam Belur, Ayush Tandon and Suraj Sharma and as an adult by Irrfan Khan) and his trials and tribulations as he leaves his home in India and is then cast out onto the ocean in a lifeboat filled with animals after his freighter is sunk. One of the tiny lifeboat’s occupants is a full size Bengal tiger that is masterfully recreated in CGI. Never for a moment does it look created by only zeros and ones.

There is so much sub-text in the story (some subtle, some a little too obvious) that it gives the adventure a depth not often experienced in films of this type. It’s so easy to get lost in the gorgeous visuals that the story at times takes a back seat to the eye candy. Life Of Pi will be one of those films that will be welcomed on DVD for many return viewings.