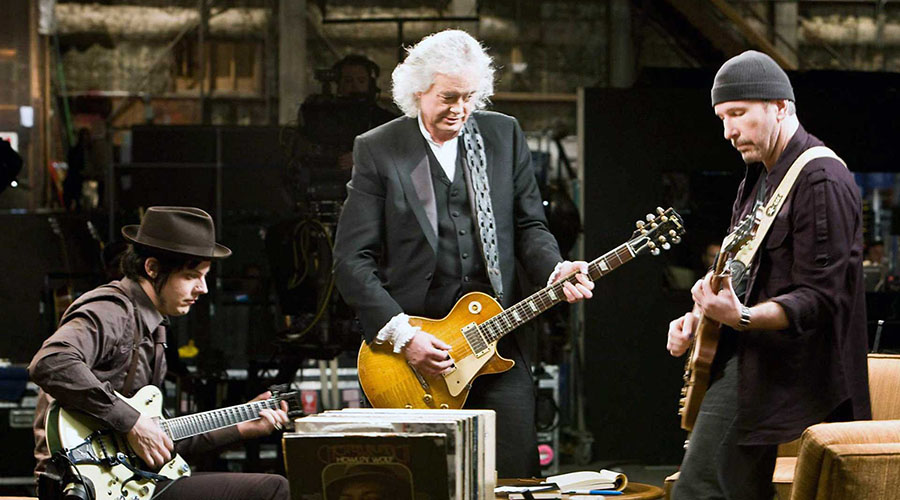 For those wanting to experience the musical sparks that can happen when three titans of the six-string meet and lock horns, It Might Get Loud can be bit of a disappointment. For this summit of three distinct guitar heroes is more of an examination of their roots and influences than it is a drawn out jam session. If you are familiar with The Edge, Jack White or Jimmy Page’s past history, then this film will have less to offer than to those not in the know.

For died in the wool fans there are still enough on-screen disclosure to get you through, including a rare visit to Page’s guitar dungeon (with its impressive number of vintage instruments), White’s country estate and cool car and The Edge’s guitar lair, which is the audio equivalent of Frankenstein’s laboratory.

They are set pieces, some of which are quite silly (like the one when the present age White meets himself as a youth for a lesion on guitar ethics), some interesting visits to real places (like the high school room where U2 first got together) and a few revelations. The scene when The Edge shows how little of his sound comes from his fingertips and how much comes from electronic effects is almost embarrassingly revelatory.

Most of the film however is in documentary form and to this end, it is a well meaning, if not safe production. This is not to say that there isn’t enough on offer to enjoy though, one scene alone makes the movie worth the price of admission. The scene when Jack and The Edge show Page the love when he plays the opening notes of the Led Zeppelin tune that launched a thousand guitar players’ interest, Whole Lotta Love. The look of admiration on their faces at that moment is like the look of children on Christmas morning.