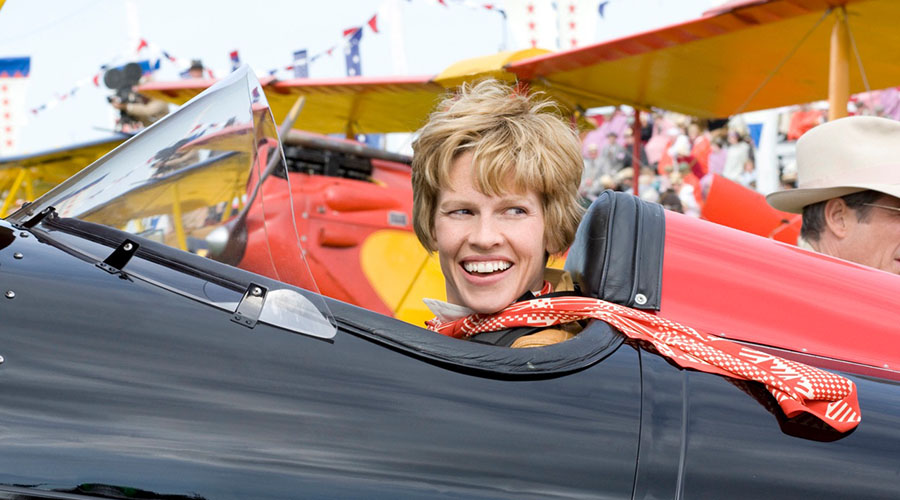 Amelia is a curious film that you end up wanting to like more than you actual do. Most people know a little about the famous female flier Amelia Earhart and her mysterious demise but this film version of her life offers little in the way of in-depth analysis or enlightenment about her true character. It instead glosses over some very interesting details in an effort to get you to sympathize with a life full of both trials and tribulations.

Hilary Swank plays Amelia with a strangely varying accent; it starts defined but subsequently slips from scene to scene. Her vocal coach must have taken a lot of smoking breaks during filming. Richard Gere as her svengali George Putnam also suffers from an elusive accent. The film relies on its spectacular flying footage to provide a heart and soul and at this it is impressive.

Putnam’s actual impact on certain parts of Amelia’s life is only hinted at and this could have provided some much needed detail. He in essence created in Amelia one of the world’s first corporate shills. There are a few brief scenes to demonstrate this (and they burst out of the film like a sly wink from Busby Berkeley) but that train of thought is never fully developed and it’s to the film determent.

It is always difficult to build suspense in a film when everyone knows the actual conclusion and unfortunately Amelia suffers from this more than most. In real life there were a number of thoughts about what actually contributed to her loss at sea and these aren’t event mentioned. Did Fred Noonan’s alcoholism contribute to it, did the rumour of the Japanese shooting her down have any validity, these questions and many more like them could have given her demise an aura of mystery, instead all we got was a dark screen with words saying she disappeared and no evidence was ever found.