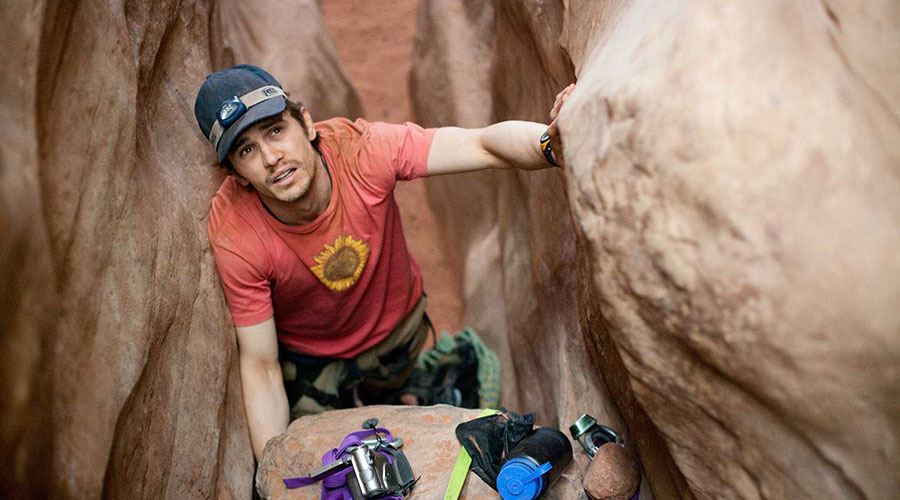 With 127 Hours, Danny Boyle once again proves his outstanding versatility. This Oscar winning director (for Slumdog Millionaire) has a resume that bristles with unique choices and films that would seem to have a difficult narrative to bring to the big screen. The challenge this time was to give movement to a true story about a solo outdoorsman that gets trapped in the wild.

James Franco plays Aron Ralston, a hyper young man who can climb, cycle and navigate with the best of them while sprouting existential dialogue and giving all those around him a running travelogue. Unfortunately for him in this case, his loner characteristics take over and he ventures forth into Robbers Roost, Utah by himself.

The isolated area, once used as a hide out by Butch Cassidy and his Wild Bunch gang is filled with huge rock formations and an almost hidden underworld between the massive stones. This proves his downfall when he knocks a boulder loose and it traps his arm. His is trapped there for five days before he severs his own arm with a dull knife to make his escape.

The challenge of giving forward momentum to a tale that is essentially a single person in a single location is met by Boyle’s examination of the life choices Ralston took that isolated him from his peers and the hallucinations he experiences while his body breaks down from dehydration and hunger. The film is also dependent on James Franco’s performance and it is stellar.

This film should come with a warning as its gruesome scenes are very confrontational but you feel so attached to Ralston’s character and plight by then that you revel in the pure triumph of both his escape and the film’s excellence.