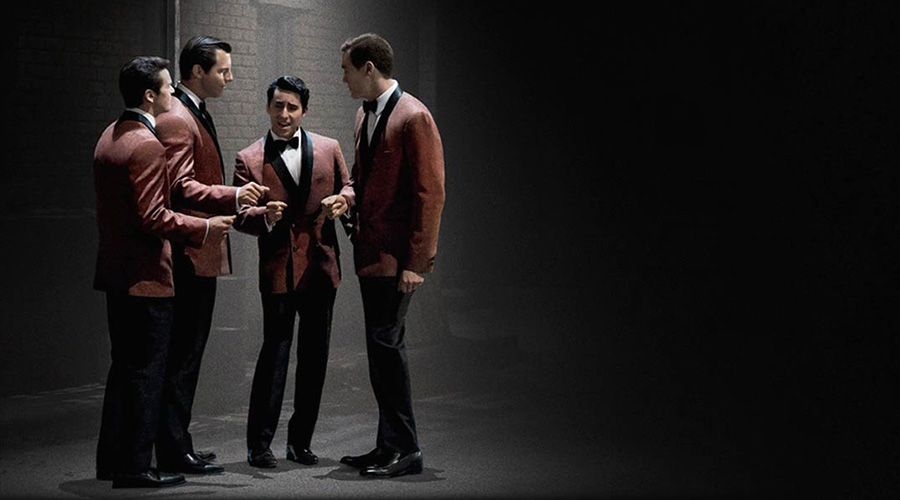 Jersey Boys is Clint Eastwood’s film adaptation of the hit stage musical of the same name.

It should be noted that Eastwood’s film is not a musical but rather features performances of The Four Seasons’ music to signpost defined periods within the band’s chronology. Correspondingly, the film is perfectly suited for those who love The Four Seasons music but do not possess a commensurate love of musicals (like me!) and as such appeals to a slightly different market. A smaller market it would seem given the film does not appear to be as successful as its theatrical predecessor.

John Lloyd Young reprises his Broadway performance and is a good choice. He sounds much like Frankie Valli and he delivers an excellent acting performance as well. Admittedly he is restricted somewhat by his baby face – he still looks like a kid as he gets older – but the changes in his personality as he ages is well defined and well delivered.

Eastwood takes ample artistic license with the presentation of the songs. Songs are, at times, used to reflect the feelings of the band members rather than the precise timeline in which they are featured. Indeed the timeline generally can be difficult to pinpoint. Few dates are given within the film; instead we’re left with mostly style cues to roughly determine the time period where each event takes place. This is smart as it helps guide us through the emotional narrative of the film but a documentary this is not.

Curiously, what is probably The Four Season’s most enduring hit, December, 1963 (Oh What a Night), is not featured within the narrative of the film – though it is included as part of a whole-cast musical reprise at the film’s conclusion. Presumably this is because that song was recorded in the mid 70’s by a different Four Seasons line-up than is the focus of Eastwood’s film and Valli only sings but a portion of that song. So, again, this is probably a smart decision.

Jersey Boys is one of those stories that looking from the outside you think, ‘wow, these guys had it so great’, only to find that underneath it all it was actually a bit shit. In this regard the story is life affirming insofar as it reminds most of us how good our relatively boring lives really are. But beyond the darker side of the story presented, Jersey Boys remains a fun toe-tapper; a reminder of great music passed; and a reminder of fun times in our youth.