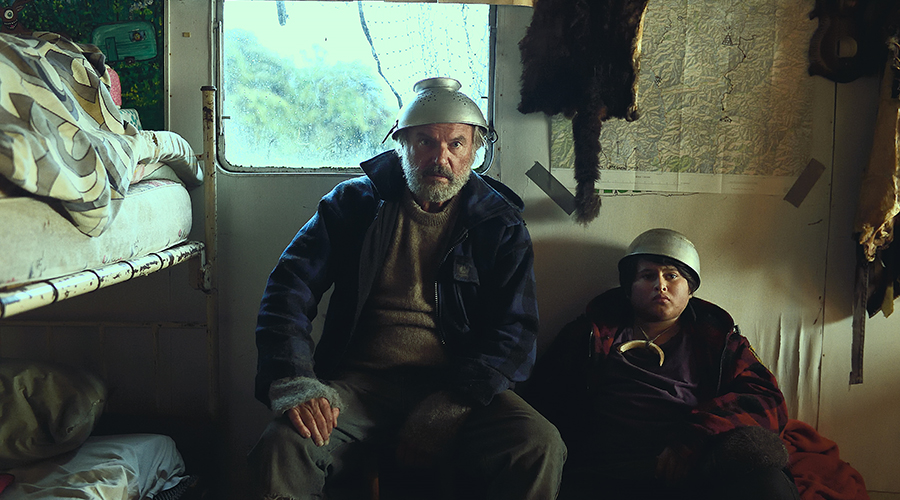 Hunt For The Wilderpeople Movie Review

Named as ‘One of ten new directors to watch’ by Variety magazine in 2007 following his excellent feature debut, Eagle Vs. Shark and having received widespread acclaim for his follow up film, Boy, Waititi now presents one last ‘small’ film before he bursts Peter-Jackson-style onto the Hollywood scene with his helming of the forthcoming Thor: Ragnarok.

Hunt For The Wilderpeople follows very much in the flavour of Waititi’s previous features. It too skates the fine line between comedy and drama though not quite as close as his previous efforts. It’s his most commercially accessible film to date, winding the drama down a notch while proportionately winding up the comedy quotient. It’s a solid crowd pleaser that playfully references other pop culture films such as Pixar’s Up (the themes of which it follows quite closely), Thelma and Louise, The Terminator and First Blood, which keeps the mood lite and the film approachable.

Ricky Baker (Julian Dennison) is a delinquent 12 year-old bounced from foster carer to foster carer until he finally lands in the loving lap of Bella (played with boundless cheer by Rima Te Wiata), nestled in the back country of the NZ wilderness. Bella’s husband, Heck (Sam Neill), is less enthusiastic about this new family member however. When developing circumstances lead to Heck and Ricky running as fugitives through the bush, a Carl Fredricksen/Russell style relationship ensues between the pair.

Waititi’s film is imbued with that characteristic Kiwi charm that makes it impossible not to fall in love with. It’s a charm that Aussie films once had before we got all ‘serious’ and lost our sense of humour. Now we Aussies (or our film commissions at least) seem to green light mostly grimy, wrist-slitting dramas. Waititi’s films remind us of what we once had and we should be thankful of that (and maybe try to regain some of it). This is not to say that Waititi doesn’t embrace darkness. There is a lot of darkness in his films (and this one is no exception) but it is balanced with an abundance humour, which smooths out its harsher lines and makes the grim moments bearable.

The film is littered with fun peripheral characters such as Ricky’s social services officer, Paula (Rachel House), who relentlessly pursues our protagonists in a manner that exceeds her station by a large margin – to good comic effect. And a group of deer hunters turned bounty hunters who want in on the action (and the reward). They all combine to together to form a warm, hearty soup of a movie that will leave you feeling good about life as you exit the cinema. Go see it if only so you can say you knew this fine ‘unknown’ director before he drew worldwide acclaim for his forthcoming Hollywood blockbuster. You won’t be disappointed.