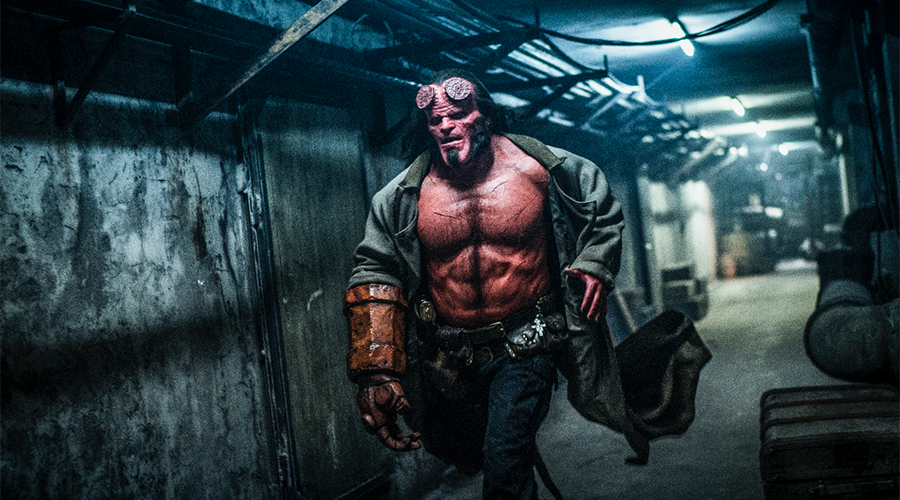 For those worried about this new film version being a pale comparison to that other movie incarnation, five minutes into the new Hellboy, those concerns will be laid to rests This new take on Mike Mignola’s horned creation is a lot of fun and can definitely stand on its own.

It is also a throw back to the horror movies of a bygone era. With its rampant gore, buckets of blood and entrails o’ plenty, it most certainly lives up to its R rating. It’s an unadulterated blast to see. David Harbour (Stranger Things, The Newsroom) presented a take on the red one that came across a little off the mark in the trailer but in full movie form, he seems a much wiser choice. Having the gravitas of Ian McShane as Professor Broom is also a major addition.

Expanding the storyline to join with the myth of Merlin and King Arthur gives the film the chance to feature some cool English settings, accents and fish and chip jokes. Hellboy is every bit the wise ass he’s always been but now is given the room to develop more into the conflicted character that the comic books so richly present.

This is the kind of crazy no holds barred film making magic that the PC police have tried their best to expunge from our cinema going experiences for years now. It harkens back to a time when anything goes but it is on point with female characters that are strong and kick butt without being just window dressing. This is a closer movie realisation of Mignola’s vision than anything that has come before.