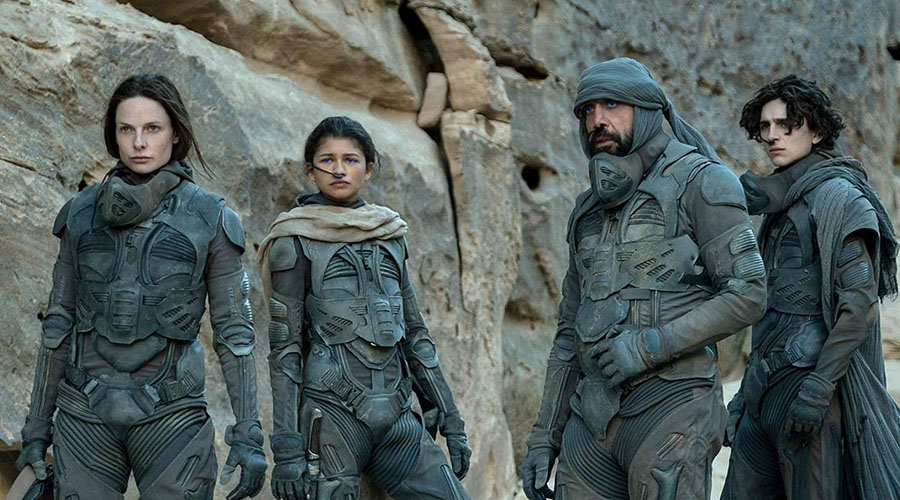 After a long series of misstarts and wayward attempts to bring Dune to the big screen, David Lynch got his chance back in 1984 and the results were mixed, to say the least. Fast forward to 2021 and director/screenplay writer Denis Villeneuve gets his chance to bring Frank Herbert’s epic Science Fiction novel into the twenty-first century with this highly stylised take of life on the planet Arrakis.

Herbert’s 1965 tale was originally serialized in the American magazine Analog (the first issue was published in 1930) and more than paved the way for Star Wars. The similar plot points are abundant but where the original Star Wars movie played it cute and cuddly, Villeneuve’s vision is dark, foreboding, and quite monochromatic. Life is harsh on Arrakis even for the ruling class.

Things play out in a slow burn fashion with tension never far below the surface. After being given the rule of Arrakis, patriarch of the Atreides family, Duke Leto (Oscar Isaac) does his best to balance his version of morality while ensuring he and his family’s future by keeping the production of Spice (a substance that imbues users with heightened vitality and expanded consciousness) at its peak.

Just like the effects of Spice, Villeneuve intends to expand the viewers’ perception of what life could be like on an alien planet and it’s not a pretty or comforting scenario. It features sights and sounds that may be new to our database but ones that get dragged down to our existing reality by a hierarchy system that limits life for all but the ruling class. Not unlike the one that has blighted things on earth for the millennial.