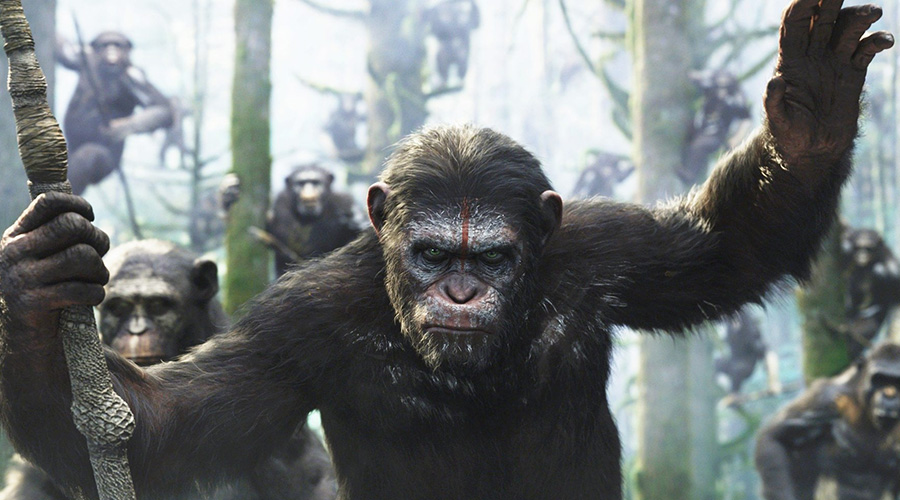 Dawn of the Planet of the Apes Movie Review

The plague created by Will Rodman’s Alzheimer’s ‘cure’ has spread throughout the globe and decimated the human population and, presumably, empowered ape populations worldwide. Caesar’s simian refugees build a growing community in the redwood forest while a splinter group of human survivors eke out an existence within the ruins of San Francisco. The diminishing fuel supply the human’s require for electricity generation inevitably bring them into contact with Caesar’s community who presides over a derelict hydroelectric facility.

This loose remake of Battle for the Planet of the Apes (the final film in the original franchise) betters its already excellent predecessor in most respects with more frequent action, intriguing plot and admirably balanced political themes. It’s a grown up film which accepts the complicated reality that good guys and bad guys are not divided along social, racial or indeed special lines; that, despite the best intentions of our heroes for peace, there is an inevitability of conflict in the world and an, albeit reluctant, place for violence within it.

We all know this, of course, but in movie land we like to believe that all issues are in simple black and white. At least that’s what the money men behind the movies tend to think. Dawn of the Planet of the Apes is here to show us that audiences are indeed capable of, and will happily digest, complicated real world issues as forms of high end entertainment and that it can be done to a high degree of quality.

Quality films require quality performances and the key roles deliver here. It’s nice to see Jason Clarke in a hero role and be effective in it. Andy Serkis is, as always, amazing with the physicality of his performance as Caesar and, as usual, you would never know it was him were his name not in the credits. Gary Oldman is sleep walking through this but even a slumberous Oldman is rarely worth complaining about. No mention of the performances would be complete without commenting on the apes in the film which are amazingly realistic. Whether they be real, make-up or CGI (likely a mixture of all three, I suspect), the effect is phenomenally convincing.

The film does fall down a tad in its overblown climactic battle which is incommensurate with the intelligent plotting and action within the film thus far. But despite this tendency towards Transformers in the final act, the film remains, on the whole, a highly entertaining blockbuster with an intelligent social commentary.