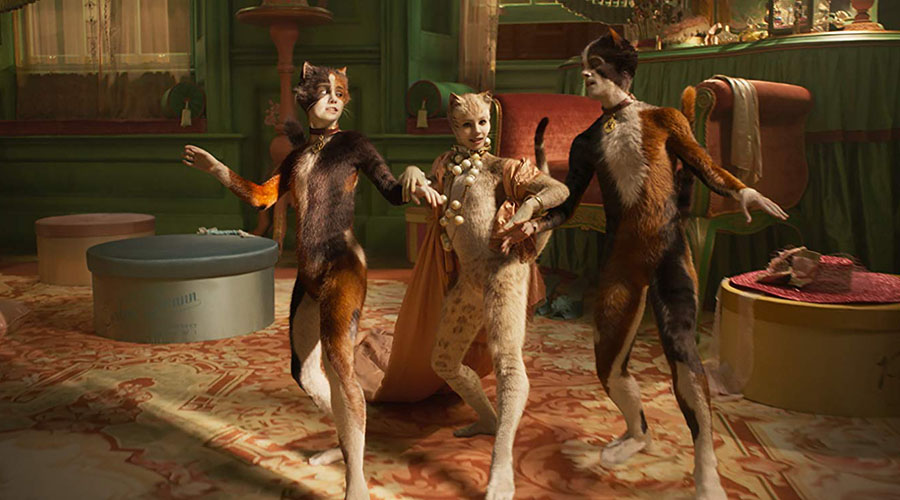 As popular culture continues with its tradition of circling back on itself, in the year 2019, we get a new film version of a musical that hit its zenith of popularity back in the eighties, Cats. This retro vibe is reflected in the overall feel and in many of the odd creative choices that are peppered throughout the film’s 110 minute running time.

Oddest choice of all is not utilising the current state of the art for cinema sound with its amazing ability for massive soundscapes. Instead we often get thin eighties sounding synth line based music. Also very few of the cast members have strong voices, with the exception of Jennifer Hudson who gets to belt out the thrice repeated hit, Memories.

Keeping things very stagy, most of the cast is adapt at the sinuous physicality and dance movements needed to ply the boards and bright lights. There is also a reliance on keeping the action of the large cast to a minimum number of sets. To highlight where the film’s main priorities lie is the casting of Francesca Hayward, a Royal Ballet Principal Ballerina as the female lead, Victoria. Her on-screen gracefulness is something to behold.

This generation’s film version of Cats is indeed an irregular one. From the bordering on creepy rendition of our fury friends to adhering to a simpler Broadway mentality with regards to staging and sound design. Where this fits in with current movie trends remains to be seen and the challenge will be for it to find a place in today’s multiplicitous society.